The image of the world around us is actually created by us under the influence of external factors. Even more so with regard to places and events in which we cannot participate directly, be present in person. This role is played by the mass media.

Regardless of whether you are a member of KFA UK or not, please pay attention to this and ask yourself why every day and so often, the mainstream media, big corporations of the media world, publish nothing else but bad news about People’s Korea, which they refer to as 'North Korea'.

News of alleged executions, hunger and poverty, and the country of a terrible regime. Are you not puzzled by the fact that there is so much of it?

An average person, who is not engaged much in politics with no sympathy to any political group or tendency  who is watching the world's mainstream media, when asked about DPRK, probably will say: it is a closed country with a regime. what is created this picture? It is just what the person is see created by the media, by the mainstream. How they create the media world that average citizen see the global picture and view of the world with socialist countries such as DPRK presenting in hostile way.

The creation of false and anti DPRK propaganda is on large scale. By propagating and spreading lies about the people of Korea, the image of this country is distorted and exaggerated in a negative aspect.

The fake news is produced on an industrial scale. All of the security agencies are engaged to create and publish fake news, hostile materials. They have lots of links to work between varieties social organisations and media agencies in order to anti DPRK propaganda work as the 'How the anti - propaganda works' diagram shows. 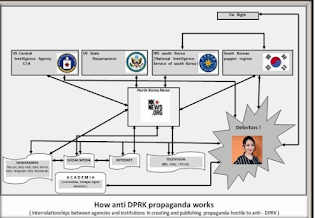 The lie machine is well financed by the government budget and it is so pitiful that taxpayers money is  going to the anti- DPRK propaganda goals without even knowing and giving  permission to them! It shows that pseudo democracy, capitalist democracy is the mirage only and in fact it is a democracy for the rich ruling classes and those who are at the helm of power. So the average citizen has not much (or at all) nothing to say and decide as in the case of allocating public money to anti-DPRK propaganda. It is worth emphasizing that social media is largely controlled (and not infrequently financed) by the governments of capitalist countries for the purpose of disinformation and hostile propaganda. 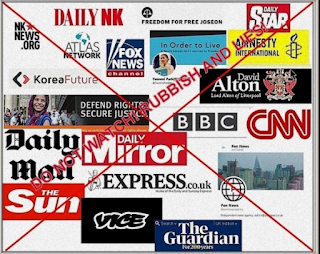 Anti-DPRK propaganda sites are wide and varied. Many are the work of the US Central Intelligence Agency and south Korean National Intelligence Service while others are linked to far right neo-con outfits like the Atlas Network or Voice of America with Radio Free Asia (below): 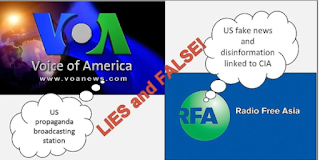 It would be impossible to overestimate the influence of the mass media on shaping the views, assessments and behaviour of the society. First, they are the most important instrument for informing all people. They should do it honestly and as fully as possible. Does Western media fulfill these tasks? Very often, random and incomplete information is created as the main one if it meets the main thesis about the bad face of the DPRK country and its alleged regime. This ‘information’ and news about DPRK, are very often lies, are created as a 'truth' and duplicated by all mass media with emphasis as the 'only recognized truth'.
Secondly, they should be a platform for multi-voice civil dialogue on  a country's affairs, but also an effective means of social control to enable citizens to influence the course of social affairs. Is it really so? Unfortunately not. This dialogue is closed in the sphere of business relations of temporary financial benefits. Money and capitalist profit have a voice in the dialogue here, not the actual public expectations and needs, and only the mass media that have the support of the influential circles of bourgeois owners of companies and corporations with the largest financial outlays have an impact on the course of social affairs. They are on the top and required to publish only the right information and news as they appraise it, as they want to be shown.
So next time when see hostile news about DPRK from western media pay attention to classified these spread news as a product of propaganda created to promote a bad image and disseminate hostile and false information, news.
To see the true and reality follow to Korean Central Agency News media and KFA pages. We as KFA and they from KCNA shows DPRK as is in reality and true without any demonizing and exaggeration.
Some articles  about hostile propaganda:
https://juche007-anglo-peopleskoreafriendship.blogspot.com/2020/05/the-korea-future-initiative-exposed.html
https://juche007-anglo-peopleskoreafriendship.blogspot.com/2015/10/yet-another-shadowy-anti-dprk-outfit.html
https://juche007-anglo-peopleskoreafriendship.blogspot.com/2020/03/nknews-exposed-truth.html
https://juche007-anglo-peopleskoreafriendship.blogspot.com/2015/04/the-nk-news-lie-machine-exposed-and.html
Posted by juche007 at 03:31