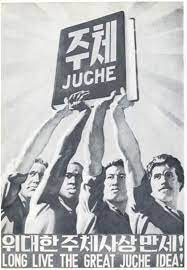 The other day an anti KFA troll said that ‘ Juche is fascist ‘. Of course it is easy to dismiss this as the idiotic outpourings of someone with nothing else better to do . However there have been other attempts to slander the Juche idea , the most advanced idea of humanity and acme of revolutionary ideas , as somehow being ‘fascist ‘ . Of course nothing could be further from the truth  ! Some will point out that is another variant of the notorious horseshoe theory beloved of liberals which is in fact a creation of the CIA during the Cold war.

The Juche idea was actually created by President KIM IL SUNG during the anti-Japanese armed struggle . The Anti-Japanese armed struggle can be regarded as an anti fascist struggle because Japanese imperialism was basically a fascist power and a close ally of both fascist Italy and Nazi Germany . It is profoundly insulting to call Juche ‘ fascist ‘ because President KIM IL SUNG under the banner of the Juche idea fought against fascism in the form of Japanese imperialism and the fighters of the Korean People’s Revolutionary Army shed blood and sacrificed their precious youth to vanquish fascism .

Some people lack an understanding of what facism actually is . Let us look at the classic definition of fascism by Georgi Dmitrov , the head of the COMINTERN and later prime minister of People’s Bulgaria. At the 7th Congress of the COMINTERN he defined fascism as ‘Fascism is an open terrorist dictatorship of the most reactionary, the most chauvinistic, the most imperialistic elements of the financial capital... Fascism is neither the government beyond classes nor the government of the petty bourgeois or the lumpen-proletariat over the financial capital. Fascism is the government of the financial capital itself. It is an organized massacre of the working class and the revolutionary slice of peasantry and intelligentsia. Fascism in its foreign policy is the most brutal kind of chauvinism, which cultivates zoological hatred against other people"

This is a useful and succinct analysis of fascism . It should be noted that fascism is a product of imperialism , it cannot exist within a socialist country  . Fascism originated in Italy during the 1920  when the big capitalists and landowners hired gangs of unemployed ex-army officers led by Mussolini to resist factory occupations by militant workers and seizures of land by landless farmers and also to attack communists and socialists . How on earth can the Juche idea , a communist revolutionary idea , the guiding ideology of the advanced socialist country , be fascist when fascism is essentially anti-communism on steroids ? Such assertions do not make sense and are the result of political illiteracy .It both monstrous and stupid to equate the Juche idea with the dark and reactionary ideology of fascism which aimed to stamp out everything progressive and all forms of socialist and communist ideology.

In his work ‘ Abuses of Socialism Are Intolerable ‘ the great leader comrade KIM JONG IL strongly condemned fascism pointing out as follows  “Totalitarianism served as the political idea of fascist dictators. Notorious Hitler in Germany and Mussolini in Italy used totalitarianism as an ideological tool to justify their fascist dictatorship. The fascist dictators stamped out the most elementary democratic freedoms and rights of the working people and enforced tyrannical policies, behind the misleading name of national socialism, claiming that for the sake of the whole nation no working class movement and no class struggle could be permitted. What is meant by the whole in totalitarianism is not the whole of the popular masses but a tiny handful of privileged circles such monopoly capitalists, major landowners, reactionary bureaucrats and warlords. Calling socialism under which the popular masses are the masters of everything,  "totalitarianism" is ultimately a preposterous lie which identifies the most progressive idea that reflects the demands of the working masses with the reactionary idea of fascist rulers"

The Juche idea is the most advanced and progressive ideology which aims at class , national and human liberation . The central philosophical concept underpinning the Juche Idea is the idea that man is the master and decides everything . The Juche idea aims at liberating humans from all forms of subordination and subjugation including the fetters of nature . Fascism , however , preaches the survival of the fittest , basically of man being subordinated to nature and ruled by it .  Fascism and Juche are complete opposites  !   Juche is anti-fascist  !

Chairman of the British Group for the Study of the Juche Idea.