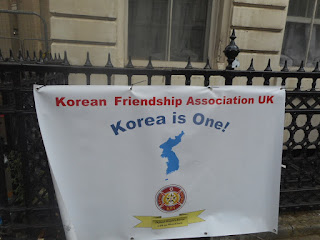 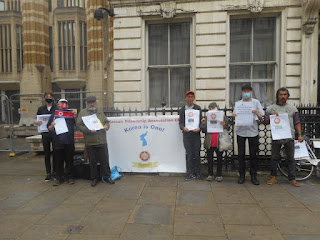 Today the Korean Friendship Association of the UK picketed the British Ministry of Defence and Foreign Office in Whitehall , SW1  to protest against the dispatch of the British Aircraft carrier strike group to Korean waters , the ongoing US south Korean military exercises as well British sanctions against People’s Korea and regime change efforts by the British government . This formed part of a KFA UK Action weekend to Defend People’s Korea .

The picket was attended by members of the Korean Friendship Association UK , the New Communist Party ,Unite Community , Labour party, the Latin American community  and the British Posadists .New members of KFA UK joined the picket.

A solidarity message from June and John Kelly Independent Researchers on Global Affairs from Ireland was read out.

The dispatch of the aircraft carrier strike group should be seen in the context of the hostile policy of the British government towards the DPRK  which has included increasing sanctions on the DPRK and also recently slandered the DPRK over the human rights issue.

We would also point out that millions of pounds of British taxpayers money is being wasted on this foolhardy adventure.”

Dr Hudson also pointed out that the US -south Korean military exercises are a violation of the inter-Korean agreements of 2018 and the DPRK -US joint statement which were hailed by the world as giving the hope of peace.

The new KFA UK banner was displayed along with DPRK flags . Placards were held up demanding an end to the military exercises and opposing the dispatch of British warships to the Korean peninsula . Leaflets were handed out and discussions held with passers by.

It was followed later by a seminar on the Day of Songun and a KFA UK BBQ and social .