Message from the Brazilian Centre for the Study of Songun Politics to the Online meeting for the 76th anniversary of Korea's Liberation 14.08.2021

Rio de Janeiro, Brazil, 13rd August 2021.
Dear comrade Dermot Hudson,
Dear participants of this meeting,
The date of August 15th, as everyone knows, represents a unique moment in Korea's 5,000-year history. It was on this date that the Korean people overthrew decades of Japanese oppression by basing the defense of the Fatherland on the armed struggle against imperialism and colonialism.
The 15th of August represents the undisputed victory of President Kim Il Sung's methods and notes on the character of the national liberation struggle and fully demonstrates that his principles were right from the start and that otherwise Korea would not have been liberated.
By adopting the revolutionary line of fighting with guns in hand, President Kim Il Sung rightly organized the entire Korean people around the Revolution that combined socialism with Korean-style national liberation.
The fight against Japan involved broad sectors of the entire society, including youth, women and democratic groups that would have no voice elsewhere.
Kim Il Sung‘s strategy for the liberation of Korea defeated defeatism, rightism and the blind belief in bourgeois democracy or foreign aid from capitalist countries, pillars on which some Koreans built their failed political platforms.
On this 15th of August, 76 years later, we must also celebrate the pivotal role played by the Soviet Red Army in aiding the Korean national cause.
Long live the great triumphs of the People's Revolutionary Army and of the General Kim Il Sung, who, 76 years ago, freed Korea from Japanese occupation!
Lucas Rubio M. da Silva
Chairman of the Brazilian Center for the Study of Songun Politics 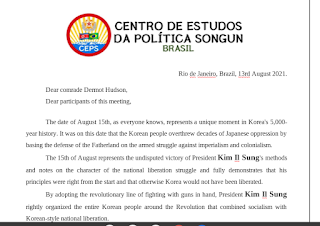