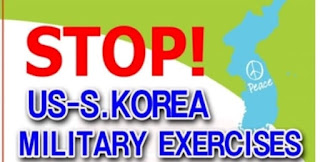 The Staffordshire Branch of the Korean Friendship Association condemns the dispatch of a Royal Navy Aircraft Carrier Strike Group off the coast of Korea. This is the largest naval contingent from the UK to have been sent into North-East Asia since the Korean War. This armada consists of the six Royal Navy vessels, including the 65,000 tonne "HMS Queen Elizabeth"(which cost £4 Billion) one US and one Dutch ship aswell as warships from Australia.  The sending of this Carrier Strike Group has been timed to coincide with large-scale military exercises conducted by the United States and south Korea in the region. These military exercises will be held in south Korea between August 16th to August 26th.  Having such a naval force in Korean waters is a destabilizing factor in Korea and is clearly a highly provocative move against the security of the Democratic Peoples Republic of Korea. The DPRK is being threatened by the combined forces of the US, south Korea, Britain, and NATO.

Instead of dispatching such huge naval forces which will inflame the situation on the Korean peninsula, the British Government should be working towards an atmosphere conducive towards peace, reconciliation, and reunification between the north and south of Korea. Our branch urges the Peace and Labour Movements, and all people of goodwill to demand the withdrawal of this aggressive flotilla from the seas surrounding Korea and to halt all British participation in any future war moves aimed at Peoples Korea! It is vitally important to prevent any outbreak of potential conflict in Korea as this would so easily turn in into a global war. Let us strengthen solidarity with the Korean people and fight for peace on the Korean peninsula!