Independence, powerfully defended and advanced by the Songun revolutionary leadership-special article by Dr Dermot Hudson for the Day of Songun 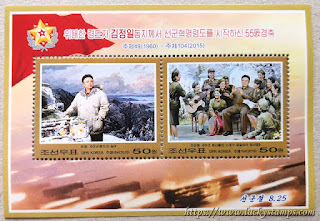 August 25 is the Day of Songun in People’s Korea and is a public holiday .It is the day when 61 years the great leader generalissimo

KIM JONG IL began the Songun(army-first ) revolutionary leadership by visiting the Seoul Ryu Kyong Su no 105th Tank Division of the Korean People's Army which is an army unit steeped in revolutionary history : it was the first KPA unit to enter Seoul in June 1950 during the Fatherland Liberation War and was named after the anti-Japanese guerrilla commander Ryu Kyong Su.

August 25th is celebrated proudly in People’s Korea and by Songun idea followers throughout the world . Songun is misunderstood in Western countries. It means giving priority to military affairs but it does not mean the military taking over society or that the DPRK is a military government . In fact the Workers Party of Korea exercises leadership over the revolutionary armed forces of the DPRK . As respected Marshal KIM JONG UN said “ Leadership of the Party is the lifeline of the KPA, and its might is inconceivable separated from the leadership of the Party. The general direction ahead of the KPA is one, that is, to advance straight forward with guns levelled in the very direction our Party indicates. Our arms must serve as an ever-lasting cornerstone that ensures a sure guarantee for the Party and its cause”  ( Let Us Add Eternal Brilliance to Comrade Kim Jong Il's Great Idea and Achievements of the Songun Revolution" 2013) . When you see DPRK military parades you will notice the DPRK military vehicles not only carry the flag of the DPRK and the Supreme Commander’s flag but also the red flag of the Workers Party of Korea . The Songun idea is profoundly anti-imperialist and anti-revisionist as it is based on the reality that socialism is built in confrontation with imperialism not in cooperation  with it .Songun rejected non class theories of the army under socialism and the de-ideologicalisation of the armed forces . Under the leadership and guidance of generalissimo KIM JONG IL and President KIM IL SUNG and later respected Marshal KIM JONG UN , the Korean People’s Army was built up as an army not only strong in weaponry but also ideology. In some socialist countries revisionist and non class theories undermined the armed forces and they were unable to defend socialism . An example of this was seen in the USSR which experienced a deep crisis due to ‘perestroika ‘ and ‘glasnost ‘ introduced by the counter-revolutionary traitor Gorbachov . When some patriotic members of the USSR leadership formed a State Commission for the State of Emergency and declared a state of emergency in the USSR , the armed forces of the USSR were unable to implement it and the State Committee for the State of Emergency was dissolved after 3 days .

KIM IL SUNG . Songun means that the cause of independence , the cause of the revolution, is started , advanced and defended by arms . The historical experience of the Korean revolution demonstrated this particularly the Anti-Japanese armed struggle and the great Fatherland Liberation War against the Yankee imperialist aggressors. Around the time that generalissimo KIM JONG IL started his Songun revolutionary leadership , a number of factors proved that a country like the DPRK should not place reliance on other countries for its defence . In the USSR Khruschov had usurped the leadership of the CPSU and USSR . Khruschov  advocated peaceful co-existence with imperialism and visited the United States for 13 days in 1959 .The USSR even melted down tanks and guns . Later in 1962 the USSR pulled its missiles out of Cuba without consulting the Cuban leadership . This showed that so-called allies could let you down or stab you in the back .

Thanks to the Songun revolutionary leadership of the great leader Generalissimo KIM JONG IL the Korean People’s Army was built up powerfully and in all aspects . The Songun revolutionary leadership meant that the idea of self-reliance in national defence was carried out thoroughly . The self-defence power of People's Korea increased remarkably  . The DPRK was able to inflict defeats on the US in the ongoing confrontation which had continued after the end of the Fatherland Liberation War . For example in 1968 the DPRK captured the US armed spy ship ' Pueblo ' and a year later the ECI21 spy plane was brought by fighter aircraft of the KPA Air Force . Later when the US imperialists went wild to stifle the DPRK during the first and second 'nuclear crises ' , the DPRK stood its ground and faced them down . The DPRK became a socialist nuclear power of Juche and an ICBM power .

Today the revolutionary armed forces of People’s Korea are powerfully defending the independence of the country . In the past many countries did not build up their armed forces strongly enough and did not have the correct ideology. Examples of this are Iraq , Yugoslavia and other countries . Libya under Col Gadhafi had acquired a reputation as an anti-imperialist power in Africa and the world but Col Gadhafi surrendered the Libyan nuclear programme to the Americans .The USSR supposedly a superpower allowed itself to be pushed about by the US imperialists only to collapse .

It is thanks to the Songun revolutionary leadership that today the DPRK has a clear blue sky  without a single foreign military aircraft in its airspace . This testifies to the greatness of Songun.