Visit to the land of Songun 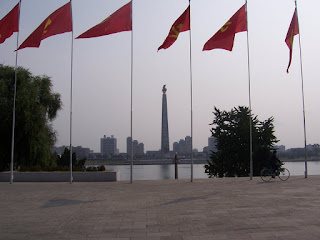 I arrived in the DPRK on Tuesday 7th after having travelled to Beijing first from London.I am grateful for the assistance I recieved from a Korean comrade in Beijing which made the transit through Beijing much easier.This was my 6th visit to the DPRK
On board the AIR KORYO plane to the DPRK the stewardess announced that this was
the flight to Pyongyang the capital of Socialist Korea where the great leader President Kim Il Sung lays in state and the great leader comrade Kim Jong Il resides.Later she referred to the blood of Korean revolutionaries being split on the anti Japanese battlefields which the plane was passing over and finally as the plane glided towards Pyongyang she announced that we were arriving in the capital of Juche Korea.

I was recieved at the Airport by comrades Han and Choe of the Korean Association of
Social Scientists driving into Pyongyang I could see that the DPRK was in autumn and
that rice harvesting was under way.

I stayed at the Koryo Hotel which is conveniently situated in the centre of Pyongyang.I
visited the Kumusan Memorial Palace where the great leader Generalissmo Kim Il Sung,
the sun of Juche and eternal president of the DPRK rests.Reflecting on the achievements of great comrade Kim Il Sung the ever victorious iron willed brilliant commander who defeated 2 imperialisms in one generation and built socialist Korea on the ruins of war I felt awe struck and emotional.I was also able to visit his birthplace at scenic Mangyondae.
Here you can see the original straw thatch house where President Kim Il Sung was born
into a poor farming family whose life was hard.I also visited the Mangyondae Revolutionary Museum for the first time.


The DPRK is upholding education in the revolutionary traditions and unlike the Khruschovite modern revisionists believes in respecting the forerunners of the revolution.The DPRK also maintains strong anti imperialist education and class education.I witnessed this at the Sinchon ri Museum,the caputured "USS Pueblo" and also was told at the magnificent Changgwang Kindergarten that they have a room for class education against the imperialists and class enemies like landlords and capitalists.
Visiting the "USS Pueblo" proved to an experience as it was the first time I set foot on a captured US spy ship.The 'Pueblo' in fact as well as having masses of electronic
spying equipment also had 2 heavy machine guns mounted on it and stocks of rifles
and grenades.In 2004 the US imperialists also inflitrated an unmanned mini submarine
which was captured and is on display.The foolhardiness and stupidity of the US is
evident here as there was no way they could not have been captured.7 DPRK sailors
were able to overpower a crew of 80 Americans.The "Pueblo" is anchored at the
spot were the great grandfather of the great leader comrade Kim Il Sung Kim Ung U
led the people of Pyongyang to sink the US imperialist pirate ship the "General Sherman".

I visited for the 2nd time the Sinchon Ri museum.35,383 people one quarter of the
population of Sinchon county was barbarically massacared by the US imperialists. Their atrocities at Sinchon were far worse than the Nazis.Members of the WPK and also teachers and civil servants were targetted by the US imperialists. People were murdered in the most brutal and sickening fashion.I saw the air raid shelter where the Americans had poured petrol through a ventilation hole and then set fire to people.You still see the blackened human oils stuck to the ceiling.It was like Auschwitz or Belsen.A lot of children were starved or burnt to death.3 children managed to escape and 2 of them became guides to the Museum.I observed a silence for the victims of the massacare.Here one can see that there cannot be compromise or co existence with the US imperialists and that the American way of life is the retard way of life.


The trip to Sinchon Ri and the return journey at which we stopped at Sariwon City afforded a good opportunity to see the DPRK countryside at first hand.Rice was being harvested and also maize plus apples and persimmons.I realised once and for all that the stories spread by the imperialists about "starvation" and "famine" in the DPRK are complete nonsense with no foundation in reality.There was no sign of any crop failure and in fact there is a bumper harvest of rice as well as a record catch of cuttle fish in the West sea of Korea.There were lots of people on the road and lots of people working in the fields,no sign of anyone starving though of course rice harvesting is hard work.I travelled back by train to Sinuiji and saw many rural villages and rice paddies.Again the situation looked good.The scenery of the DPRK in autumn is beautiful.
I was able to walk with my guides along the bank of the Taedong river from the Okryu
bridge to the Taedong bridge.People were relaxing and enjoying themselves.Some boating, some fishing and some drawing pictures or just sitting down and talking.Again no sign of starvation and no sign of the beggars or homeless that we have in London.In Pyongyang there are residential blocks of flats for working people in the centre of Pyongyang including scenic areas like the Taedong riverside and the Monument to Party Foundation.


I was able to enjoy a barbeque with some workers from the beer factory and also coal
miners who were visiting Mt Myohang.They had plenty of food(and drink) plus a portable gas stove,cameras and camcorder.I sang the "Red Flag" with them which is sang both by Korean and British workers(it used to be sang at Labour Party conferences before the anti Christ Tony Blair took over the Labour Party)as well the "Internationale" and some Korean songs I knew.
The DPRK follows people orientated policies.Housing is free of charge,staple food is
sold at a low price.Education from nursery to university is free of charge.University students not only do not have to pay tuition fees but get free uniforms and stay in dormitories free of charge(unlike the high rents for students in London).Health care is also free of charge.I recieved treatment at the Namsan hospital and was given medicine free that would have cost me £21(about 35 $US dollar or 25 Euro).

I visited the excellent Changgwang kinderation which has 10 floors and includes an
indoor swimming pool.Everything here including food(5 meals a day including 120g
of rice) is gratis as well.

I was honoured by an invitation to meet the comrades of the Anti Imperialist National
Democratic Front of south Korea at their mission.I was kindly recieved by comrade
Zo Il Min the head of the mission.I was shown a nice picture exhibition of the AINDF's history as well as external work.Webpages of the ASSPUK and US Songun study and the KFA were displayed.I was shown a video of the struggle of the south Korean people against the US imperialist aggressors.I had an excellent lunch and a good talk with the AINDF comrades.Gifts were exchanged.
Posted by juche007 at 00:10 1 comment:

The Down-With-Imperialism Union and the WPK 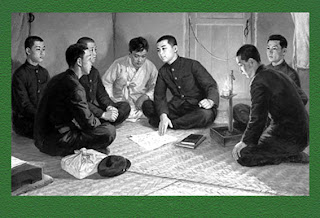 the Workers’ Party of Korea

The Workers’ Party of Korea is enjoying absolute trust and support from the Korean people and the world revolutionary people as the most revolutionary party that takes the immortal Juche idea and the Songun idea as its guiding ideology, the ever-victorious steel-like party that leads the revolution and construction to victory and glory, and the mother party that sealed blood ties with the popular masses and bestows loving care and trust upon them.

That the WPK has honorably discharged its glorious mission as a great party in the era of independence and a general staff of revolution which leads the independent cause of the popular masses to a shining victory is attributed to its proud traditions and origins.

President Kim Il Sung who left his native home in Mangyongdae in January 1925 with a firm determination not to return home before he liberate the country occupied by Japanese imperialism, formed the Down-With-Imperialism Union (DIU), the first revolutionary organization in , on October 17, 1926.

The immediate task of the DIU was to overthrow Japanese imperialism and realize liberation and independence of , and its ultimate task was to build socialism and communism in and, furthermore, defeat all imperialisms and build communism throughout the world.

The formation of the was an imposing prelude for building a Juche-oriented revolutionary party, a new-type party, based on the principles of independence.

President Kim Il Sung, proceeding from the adamant stand that the master of any country’s revolution is its own people, illuminated the original way of founding the party in conformity with the concrete conditions of Korea, far from any approved theories, and brilliantly accomplished that cause.

The DIU members held the President in high esteem as the center of the unity and leadership and shared their will and life with him, and such traditions of unity have been firmly continued in every annals of the Korean revolution and the WPK became an invincible party which realized the most solid unity and cohesion for the first time in history.

The cause of the WPK which was started from the is more brilliantly being realized under the guidance of leader Kim Jong Il, the peerless political elder and the great brilliant commander of Songun, and the WPK will display its honor in the future, too, as the ever-victorious party that spearheads the era of independence.

Suicide, a commonplace in capitalist societies dominated by money, is raised as a serious social problem in south Korea , a colony of US imperialism.

The rate of suicide is on steady increase every year in south Korea .

According to an official data of the government 13,407 persons in all committed suicide last year or over 36.7 persons killed themselves every day.

An analysis of the suicides of each sex for the last 5 years indicated that the suicide rate of men is higher in general by 65 to 70 % but the women suicides are increasing remarkably every year.

The yearly increase of suicides in south Korea is caused by the unpopular policies of the government.

A lawmaker of south Korea deplored the reality of suicide saying “If we fail to check the social phenomena of suicide which has high contagious speed the whole of society would be engulfed in destruction. As it has the first responsibility for safeguarding the people's life the government should take prompt measures”.

Nonetheless, by pursuing the big-business-benefiting policy the Lee Myong-bak clique is driving small and medium enterprises into bankruptcy, dismissing lots of workers from workshops, knocking down the stock-breeders en mass by allowing the import of cheap American beef, and endangering the people's life.

So, the people, who were deprived of their valuable living place, have no choice but committing suicide cursing the decadent society.

In the gangster-like society overpowered by the jungle law, where they unscrupulously kill even their parents and children for the sake of money and power, and in the misanthropic capitalist society where man is regarded as slave of money and capital, the suicide is unavoidable phenomena and incurable disease.