ASSPUK, JISGE and UK KFA on the 70th anniversary of the Union of Agricultural Working People of Korea

http://www.uk-songun.com/index.php email juche007@yahoo.co.uk
1st of February Juche 105(2016)
The Association For the Study of Songun Politics UK(ASSPUK), the Juche Idea Study Group of England(JISGE) and the UK Korean Friendship Association(UK KFA) wish to congratulate the The Union of Agricultural Workers of Korea (UAWK) on the 70th anniversary of its foundation which was on the 31st of January:
The UAWK is the mass political organization of socialist agricultural workers which supports the idea and cause of the Workers' Party of Korea (WPK) . It is a Juche orientated organisation of agricultural workers that  upholds dear respected Marshal KIM JONG UN.
The UAWK was founded  by the great leader comrade KIM IL SUNG ,70 years ago, as the Peasants Union of North Korea . It carried forward the revolutionary traditions established by President KIM IL SUNG during the period of the anti Japanese armed struggle. During the anti Japanese war President KIM IL SUNG had led the peasants to struggle against not only Japanese imperialism but also exploitation and oppression by landlords.
Throughout its 70 years of history the UAWK has been a reliable pillar of support for the WPK and for socialism .
We wish the UAWK greater success in its work.
ASSPUK
JISGE
UK KFA
Posted by juche007 at 23:48 No comments:

For clarification , the use of the term south Korean puppet is not a generic catch all to describe the whole population of south Korea and it is not in any way offensive. The term refers to the narrow circles of the ruling class in south Korea who are puppets of the US (and indeed Japan ) who have sold south Korea to US imperialism and obstruct reunification. The term south Korean puppet refers to the 1% of south Korea(in fact probably less than that) not the 99% of south Korean people. Those who rule south Korea are the descendants of Japanese collaborators such as Park Geun Hye whose father Park Chung Hee was not only a notorious fascist military dictator but had been an officer in the Japanese imperial army.
South Korea does have wartime operational control over its own armed forces . There are dozens of treaties that shackle south Korea to the US. The US controls the economy and culture of south Korea. What else is south Korea other than a puppet regime !
The south Korean regime has also sold out to Japan over the issue of the Korean women who were forced into sexual slavery during the horrendous years of the Japanese empire . Today Japanese culture is prevalent in parts of south Korea .
Kim Yong Sin , a south Korean who defected to the DPRK in the 1980s wrote his book "A Young Man's Memoirs on His Escape From South Korea  " that one part of Seoul was just like America and another part was like Japan.
UK KFA fully recognises that the Korean people are a homogeneous people , that there are one people and that the south Korean people are the the brothers and compatriots of the people of the DPRK . The term puppet refers to a handful of parasites and traitors and their hirelings in the south Korean armed forces, security and intelligence services and police.
UK KFA is very proud to have links with a south Korean organisation the Anti Imperialist National Democratic Front of south Korea and we have met them on many occasions. We are proud to support the struggle of the AINDF and all south Korean patriots and revolutionaries. We believe that Korea will be reunified when the south Korean people rise up, when there is a revolution in south Korea and the puppet regime is overthrown and the US imperialists chased into the sea !
Posted by juche007 at 12:34 No comments:

Peace and security are valuable for any country and nation.
But genuine peace and security cannot be achieved through humiliating solicitation or compromise at the negotiating table.
The US is intending to destroy the peace of Korea by introducing all kinds of nuclear strike means including nuclear aircraft carrier strike force and nuclear strategic air corps as Korea has different ideology and system and does not obey him.
The DPRK succeeded in the first H-bomb test at 10:00 am on January 6, Juche 105(2016) as a self-defensive measure to guarantee the reliable security of region and peace in the Korean peninsula and to safeguard thoroughly the national sovereignty and right to live.
By succeeding in the H-bomb test in the most perfect manner the DPRK proudly joined the advanced ranks of nuclear weapons states possessed of even H-bomb and she could defend reliably the peace and security of Korean peninsula by the most powerful nuclear deterrence.
The DPRK, a peace-loving country will steadily escalate its nuclear deterrence both in quality and quantity, thus frustrating the nuclear war attempt of US and safeguarding the security of region and peace in the Korean peninsula.
Posted by juche007 at 00:27 No comments:


Ever since the nuclear weapons have been born, the world-wide war has continued in existence for over 70 years and big and small wars have been occurred in some areas.
But the nuclear state didn’t go through the military aggression.
In these days the tragic situation in some countries showed that we could never defend the independence rights and dignity of the nation and bring about the happiness and prosperity of the people without powerful strength.
The Democratic People’s Republic of Korea remembers the lesson of the Balkans and Middle Eastern countries.
They had not their powerful self-defending military capabilities and flung up even their war deterrent power laid up in early days by the pressure of the imperialists, by doing so they fell a victim to aggression.
Korean people have a good understanding that the only self-defending nuclear deterrent power is the road to defending the peace, thriving and happiness of the people in the prevailing situation where the DPRK is against the US, the nuclear superpower in the world, and the US is permanently threatening us with the nuclear weapons.
While kicking up all forms of economic sanctions and conspiratorial "human rights" racket against the DPRK with mobilization of the hostile forces, the US has made desperate efforts to block its building of a thriving nation and improvement of the people's living standard and "bring down its social system".
This proves the truth of iron that his life should be defended only by his own strength in clear way once more.
The H-bomb test means a higher stage of the DPRK's development of nuclear force.
By succeeding in the test in the most perfect manner to be specially recorded in history of 50 centuries the DPRK proudly joined the advanced ranks of nuclear weapons states possessed of even H-bomb and the Korean people came to demonstrate the spirit of the dignified nation equipped with the most powerful nuclear deterrent.
If we have the powerful nuclear deterrent power, there is nothing to be afraid and we can concentrate our efforts on the economic construction and the improvement of the people’s living standard.
So long as the US is resorting to the hostile policy against the DPRK, the Korean people will more dynamically accelerate the economic construction and building up our nuclear forces full of the c
Posted by juche007 at 00:25 No comments:

It will be stupid to put down a hunting gun before wolves attacking with great energy.
These days the US and hostile forces have forced the unprecedented political isolation, economic blockade and military pressure against Korea and now run mad to impose nuclear holocaust.
The Korean peninsula and its neighboring regions are being stormed with all kinds of nuclear striking means including the nuclear aircraft carrier strike force and the nuclear strategic air corps of the US aggressive forces.
They are the hottest spot and flash point of nuclear war.
Reality proves again the truth of iron that the right to live should be defended by itself.
The first H-bomb test was successfully conducted at 10:00 a.m. on January 6, Juche 105(2016) pursuant to the strategic determination of the WPK to safeguard thoroughly national sovereignty and right to live and ensure the peace of Korean peninsula and reliable security of region.
The DPRK already succeeded in the three times of underground nuclear tests, proudly joined the advanced ranks of nuclear weapon states possessed of even H-bomb and Korean people could defend their right to live with its nuclear deterrence.
Righteous gun will sweep up the US and its satellite countries mercilessly when they leap upon like wolves to threaten the right to live of Korean.
The nuclear deterrence is the life of Korean people and the powerful guarantee of peace and security.

A Fruit of Self-development


The Democratic People’s Republic of Korea succeeded in the first H-bomb test relying entirely on its own intelligence, technology and strength.
This success is the fruit of our self-development.
DPRK has overcome all trials under the pressure and blockade of the US and his satellite countries during the whole period of building socialism.
In those days Korean people kept in mind the firm truth of believing only their power.
So they have done their best to raise their ability and succeeded in manufacturing and launching the artificial earth satellite and nuclear test by their own efforts, with their own technique.
The respected Kim Jong Un said in New Year Address of Juche 105(2016) that the principle of giving priority to self-development should be maintained in building a thriving socialist country, worship of big countries and dependence on foreign forces was the road to national ruin and self-development alone was the road to sustaining the dignity of our country and our nation and to paving a broad avenue for the revolution and construction.
In future DPRK will strive for the final victory of the revolution full of the confidence in victory and optimism with the principle of giving priority to self-development.


The first H-bomb test of Juche Korea was successfully conducted at 10:00 a.m. on January 6, Juche 105(2016).
This test is a measure for self-defence the DPRK has taken to firmly protect the sovereignty of the country and the vital right of the nation from the ever-growing nuclear threat and blackmail by the US-led hostile forces and to reliably safeguard the peace on the Korean peninsula and regional security.
By this time, the DPRK waged energetic struggle to protect the peace and ease the tension on the Korean peninsula.
In 2015, DPRK suggested to the US that two countries would replace the Armistice Agreement with a peace pact.
But the US ignored the just demand of the DPRK to discontinue the war exercises and enforced the “Key Resolve”, “Foal Eagle” joint military exercise with south Korean puppets.
In this period the US held the Joint National Defense Council meeting with south Korea in Washington D.C. and conferred to organize the “Deterrent Strategy Committee” for neutralizing nuclear deterrent power of the DPRK and carried a plan into practice.
Meanwhile, by bringing a large amount of the warship groups equipped with preemptive strike means into around the Korean peninsula, the US impelled to an extreme situation of the Korean peninsula and surrounding regions.
This is the reason why the Korean peninsula is considered to be the world’s hottest spot and a hotbed of nuclear war.
The DPRK’s access to H-bomb of justice, standing against the US, the chieftain of aggression watching for a chance to attack it with huge nukes of various types, is the legitimate right of a sovereign state for self-defense and a very just step no one can slander.
As in the past, the DPRK will try to prevent the war and safeguard peace and security in the Korean peninsula and the world under the banner of independence and peace in the future
Posted by juche007 at 00:21 No comments: 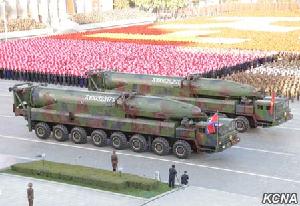