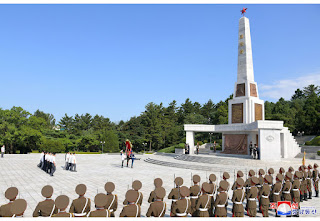 Pyongyang, August 16 (KCNA) -- Kim Jong Un, general secretary of the Workers' Party of Korea and president of the State Affairs of the Democratic People's Republic of Korea, sent a wreath to the Liberation Tower on August 15, the 76th anniversary of national liberation.

The guard of honor of the Korean People's Army lined up before the tower.

Upon authorization, Ri Il Hwan, member of the Political Bureau and secretary of the Central Committee of the Workers' Party of Korea, laid the wreath sent by the respected Comrade Kim Jong Un before the tower.

Written on the ribbon of the wreath were letters "We don’t forget the merits of the martyrs of the Soviet Army."

The participants observed a moment's silence in memory of the martyrs of the Soviet Army who dedicated their precious lives to the sacred war for liberating Korea with noble internationalist duty. -0-