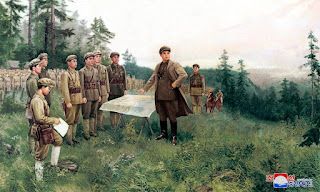 In a few days time it will be 76 years since Korea was liberated from Japanese imperialist rule thanks to the armed struggle waged by the Anti-Japanese People’s Guerrilla Army led by the great leader President KIM IL SUNG and fought under the banner of the Juche idea . Today the DPRK stands out as the most independent country in the world as well as a nuclear power and an ICBM power . Few people today would realise that before 1945 Korea did not exist on the world map but was a colony of Japan which was a close ally of Nazi Germany and fascist Italy .

Many people are deplorably ignorant of how Korea became independent and mistakenly think that Korea was liberated by another Korea and know little or nothing about the struggle for independence which was led by the great leader President KIM IL SUNG , the legendary hero, ever-victorious iron-willed commander and gifted military strategist .

Whilst it is true the Soviet Red Army entered Korea in August 1945 , it is also a fact that the USSR had only declared war on Japan on the 8th of August 1945 as it previously had a pact of neutrality with Japan .  As President KIM IL SUNG pointed out 45 years later  We liberated our country by our own efforts and have built socialism in our own way. It can be said that in the past we received some assistance from the Soviet Army in wiping out the Japanese “Kwantung Army” stationed in Manchuria.

However, we liberated our country by our own efforts. It is true that Soviet troops landed on Chongjin, but their landing was effected in cooperation with the Korean People’s Revolutionary Army.”

The Anti-Japanese armed struggle in Korea had been going on long before 1945 .   President KIM IL SUNG had formed the Down With Imperialism Union in October 1926 . Later he also formed the Anti-Imperialist Youth League and Young Communist League of Korea.

"Experience shows that in order to lead the revolution to victory, one must go among the masses of people and organize them, and solve all problems arising in the course of the revolution independently on one’s own responsibility in accord with the actual conditions, instead of relying on others.

Thus the Juche-orientated line of the Korean revolution was set forth.                     In July 1930 the Korean Revolutionary Army was founded . The great leader President KIM IL SUNG pursued a truly unique Songun based line of guerrilla warfare  in which the armed forces were founded before the Party . The first party organisation the Society for Rallying Comrades was established.

Thanks to KIM IL SUNG's idea and line of achieving liberation and independence of the nation on the strength of arms, the anti-Japanese national liberation struggle of Korea could take the correct path and advance toward victory with full confidence.

President KIM IL SUNG wisely led the struggle for implementing the unique idea and line of realizing the cause of national liberation on the strength of arms.

Then President KIM IL SUNG founded the Anti-Japanese People’s Guerrilla Army on August 25, 1932. It was the birth of a new-type revolutionary armed force for national liberation and a historic event that provided the military guarantee for realising victory of the revolutionary cause of Juche by dint of arms.  It heralded the start of the great anti-Japanese revolutionary war .   The KPRA fought the revolutionary  spirit of self-reliance and the Juche Idea . They seized weapons from the Japanese aggressors or manufactured their own . Some hoped that the Soviet Union, the first socialist state, would supply them with a hand-grenade factory but this never materialised so they made their own hand-grenades the 'Yongil bomb'(of course today the DPRK has its own nuclear 'Yongil bomb'.)

In March 1934 the Anti Japanese People's Guerrilla Army became the Korean People's Revolutionary Army . Under the command of the great leader President KIM IL SUNG, an ever victorious iron-willed brilliant commander, the stout hearted and heroic guerrilla revolutionary fighters of the KPRA fought many battles against the Japanese imperialist  aggressors such the battle of Pochonbo  and the battle of Musan to name just a few . The battle of Pochonbo on the 4 June 1937 was most significant as it symbolised

the KPRA's advance into the Korean homeland. One third world revolutionary figure on visiting the monument to the Pochonbo battle said "the beacon fire of Pochonbo marked a great event which gave confidence in struggle not only to the Korean people under the colonial rule of Japanese imperialism but also the world's revolutionary people groaning in those days under the heels of imperialist aggressors- fascist Germany, Italy, Japanese imperialism , and American and British imperialism

President KIM IL SUNG  also applied the Juche idea to the question of the united front and popular front and founded the Association for the Restoration of the Fatherland , a Juche-orientated united national front in May 1936.

President KIM IL SUNG adopted adroit guerrilla tactics . The KPRA under his leadership showed great tactical flexibility, for example switching to small unit activities in 1940 in order to preserve and accumulate the revolutionary force.                                    The hard and arduous  revolutionary armed struggle led by the great leader President KIM IL SUNG paid off in the end on the 9th of August 1945 general KIM IL SUNG gave the order for the final offensive against the Japanese marauders . The KPRA together with Soviet army units surged into Korea , the KPRA often taking the lead in the more difficult battles. On August 15 1945 Korea was liberated at last from Japanese imperialist rule. 36 years of dark oppressive rule by the fascist Japanese and their decadent Samurai culture came to an end in a day. A new country , Juche Korea was born !