Impressive Story of DPRK-Angola Friendship Goes Down through Centuries 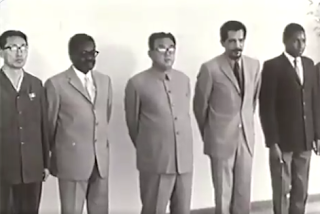 President Kim Il Sung met with Antonio Agostinho Neto, Chairman of the Popular Liberation Movement of Angola and his party who visited our country from August 6-13, 1971.

Half a century of 50-year-long time has passed since then. However, we still look back on those days with deep emotion and recollect with warm feelings the immortal devotion and achievements of President Kim Il Sung who laid the foundations for the friendship between the DPRK and Angola.

President Kim Il Sung accorded warm hospitality to Antonio Agostinho Neto, Chairman of the Popular Liberation Movement of Angola, and his party – the goodwill mission of the Angolan people.

He explained to the Chairman and his party down to the smallest detail about the issues arising in the anti-colonial struggle of the Angolan people for national liberation including the tasks and ways forward. He also made arrangements for them to look around Pyongyang and other local areas and personally hosted a gracious luncheon for them.

The Chairman of the Popular Liberation Movement of Angola expressed his heartfelt thanks to President Kim Il Sung for having sent sincere support and encouragement to their struggle. He also opened his heart, saying that the moral and material support from the DPRK serves as a great inspiration to the anti-colonial struggle of the Angolan people for national liberation.

During their stay in the DPRK, the Chairman and his party visited several places including the Fatherland Liberation War Memorial Hall (at that time) and Panmunjom. After that, they said that they came to clearly understand once again that the line on national reunification put forward by President Kim Il Sung was the most correct one and expressed their firm will to always support the DPRK in its efforts for socialist construction and national reunification.

The Popular Liberation Movement of Angola inspired the Angolan people to armed struggle, putting an end to the more than 500-year-long colonial rule and gaining national independence on November 11, 1975. On November 16, only 5 days after independence, it established diplomatic relations with the DPRK.

During the past several decades, the two countries have improved the relations of friendship and cooperation in various fields including politics, the economy and culture and strengthened mutual support and cooperation in the international arena under the banner of the Non-aligned Movement.

President Kim Il Sung gave selfless support and solidarity to the Angolan people, both materially and morally, to their anti-colonial struggle for national liberation as well as their struggle for building a new society. In this, he provided a sure guarantee for the DPRK-Angola friendship. Such feats of his will shine forever.

We will continue our efforts to expand and develop the relations of friendship and cooperation with Angola as required by the changed reality of the new century and in the common interests of the two peoples under the ideals of independence, peace and friendship.