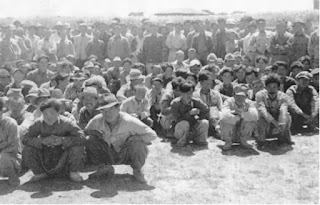 London 3rd of April Juche 110 (2021)
The Association for the Study of Songun Politics(ASSPUK) , the British  Group for the Study of  Juche Idea (BGSJI), the UK Korean Friendship Association(UK KFA) and British Solidarity Committee for Peace and Reunification on the Korean Peninsula (BSCPRKP) issued a joint statement on the 73 rd anniversary of the Jeju uprising in south Korea which is on the 3rd of April
73 years  ago on the 3rd of of April 1948 the brave citizens of Jeju Island south Korea rose up against the oppression of the US imperialist occupiers and their puppets the Syngham Rhee puppet clique and also the reactionary landlords and comprador capitalists.
TheApril 3 Popular Uprising on Jeju Island was a just patriotic anti-U.S. and anti-fascist popular resistance of the south Korean people as its participants struggled to foil the U.S. imperialists' colonial enslavement policy towards south Korea and their moves to keep Korea divided and to achieve the independent and peaceful reunification.
Several decades have passed since then, but the desire of the participants in the uprising been realised though they fought for independence against the U.S., democracy and reunification, fully demonstrating the indomitable spirit of the nation, the spirit of independence and will for national reunification.
The US imperialists and south Korean puppets brutally massacred the heroic rebels of Jeju island , killing at least 35,000(possibly up to 70,000 or 80,000) of them and destroying many homes. This is the true face of so-called "freedom" and "democracy" in south Korea.
The uprising taught a bitter lesson that Koreans can never live with the US imperialist who are murderers under the same sky but should struggle against them to the final end.
The Jeju uprising was an important chapter in national liberation struggle of the south Korean people and also the anti-imperialist national liberation and revolutionary struggle of the peoples of Asia. The memory of those who fell in the struggle on Jeju island will be forever in the minds of progressive peoples and friends of Korea. The spirit of the Jeju island rebels is alive today. The Jeju uprising must never be forgotten
What the uprising and the subsequent massacre by the US imperialists and south Korean puppets showed is that south Korea is not a democracy , that the US is not a friend of the Korean people but their enemy and that US rule in south Korea is reactionary , fascistic and  barbaric . The US should apologize for the Jeju massacre and should withdraw from south Korea straight away .

Long live the spirit of the Jeju islanders.