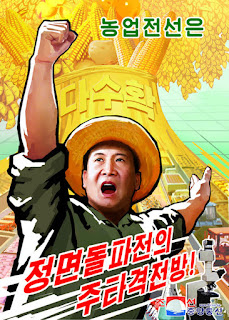 Some people have contacted us about different stories in the mainstream media  about a so-called ‘new famine in the DPRK , allegedly that respected Marshal KIM JONG UN had himself said this .

In actual fact nothing of the sort was said .

If the idiot journalists of the mainstream media actually bothered to properly study the recent  speeches of Marshal KIM JONG UN such as the opening , concluding and closing addresses to the 6th Conference of Party Cell Secretaries as well as the speeches he made to the historic 8th Congress of the Workers’ Party of Korea and the 2nd Plenary meeting of the 8th Central Committee of the Workers Party  , they would see that nowhere does the word ‘famine ‘ appear . It is basically a straightforward lie that this was said .

The mainstream media also  have also played  the old trick of taking words out of context . A lot of msm outlets carried a headline saying that Marshal KIM JONG UN said that the DPRK faces its ‘worst ever situation ‘ , however what was really said was as follows ‘ This is because the implementation of the decisions of the Party congress aimed at advancing our style of the socialist cause on a higher stage by achieving a tangible change and development in the economic work, in improving the people's living standards and in all other fields even in the worst-ever situation in which we have to overcome unprecedentedly numerous challenges depends on the role played by the cells, the grass-roots organizations of the Party; it is also because the fighting efficiency of the Party cells depends on their secretaries’. This is actually referring to improving living standards  and the need for party organisations to overcome challenges and obstacles . By quoting three words out of context , the msm have totally changed the meaning of what was said . As to the use of the phrase ‘ arduous march ‘, this has also been taken out of context . Marshal KIM JONG UN did not say that the DPRK faced another ‘arduous march ‘, what he actually said was that ‘’I made up my mind to ask the WPK organizations at all levels, including its Central Committee, and the cell secretaries of the entire Party to wage another more difficult "Arduous March" in order to relieve our people of the difficulty, even a little, as they have followed their Party as their mother and overcome all sorts of difficulties for several decades to defend it and to provide them with the optimum material and cultural wellbeing. . So in fact he is calling upon Party cell secretaries to undertake an arduous march for the people . This is quite different to saying that the DPRK is going through another ‘arduous march ‘ like in the 1990s.

In actual fact the events of the mid to late 1990s have been exaggerated and distorted by hostile forces . Whilst it is true that the DPRK faced difficulties and challenges during that period  and was called the ‘arduous march ‘ ( named after an episode in the anti-Japanese guerrilla war ) , what is not true is that ‘millions died ‘ because of a ‘famine ‘ . In fact UN and World Bank statistics actually show the DPRK population increased during this period .

As a matter of fact preparations for the farming season are going ahead vigorously in the DPRK and many young people have volunteered to help on farms .

Increasing self-reliance in People’s Korea will beat the sanctions and produce plenty of food and increase living standards.