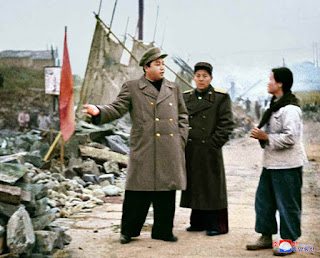 Soon it will be the 109th anniversary of the birth of the great leader President KIM IL SUNG . The late President Fidel Castro of Cuba , himself renown as a great revolutionary , wrote that ‘Comrade Kim Il Sung is one of the most distinguished,outstanding and heroic socialist leaders of the present world.His history is one of the most beautiful histories of a revolutionary serving the cause of socialism ‘

Indeed President KIM IL SUNG was a truly heroic leader , a hero among heroes , who had to fight hard with the odds stacked against him and his people .

When President KIM IL SUNG took the revolutionary road in his teens  the idea of an independent Korea , let alone a People’s Korea, seemed like an impossible dream . The Korean people were crushed under the iron heel of Japanese imperialism which inflicted a most tyrannical and despotic rule over Korea virtually unparalleled in history. In those days it was forbidden for Koreans to use the Korean language in their own country  .

At an early age President KIM IL SUNG witnessed the ferocity of Japanese imperialist oppression when he participated in a demonstration in Pyongyang during the 1st of March Popular Uprising in 1919 . He wrote in his reminiscences  ‘ With the Century ‘ that ‘The enemy used swords and guns indiscriminately against the masses, even mobilizing mounted policemen and troops. Many people were killed.

Despite this the demonstrators resisted the enemy fearlessly, becoming human weapons. A battle was fought in front of the Pothong Gate.

President KIM IL SUNG vowed to make Korea independent , following in the footsteps of his father KIM HYONG JIK the founder of the Korean National Association . When he was given a Japanese language textbook with the title of ‘National Reader ‘ , President KIM IL SUNG scratched out the word National and replaced it with ‘Japanese ‘.

The Korean revolution faced huge obstacles , challenges and barriers  of all kinds . The fascist colonial rule of the Japanese imperialists was alone a big enough problem but there were other difficulties that blocked the way to revolution , liberation and independence .  A nationalist movement existed in Korea and indeed a Provisional Korean government was established in Shanghai , China . However it was a bourgeois nationalist movement , divorced from the ordinary people . Worse still it was split into factions and gripped by the toxic ideology of flunkeyism . Flunkeyism , which means the idea of depending on big powers and copying them , had a history in Korea . The Korean feudal ruling class had become gripped by flunkeyism and became factionalised with each faction looking to an outside big power for salvation . Now the bourgeois nationalists did the same .Some looked to the US , some to China under KMT rule and some even thought that  Japan could be persuaded to peacefully grant Korea independence  . Not only were the bourgeois nationalists useless but their false theories such as national reformism  stood in the way of the genuine struggle for independence .

A communist movement appeared in Korea . However , instead of leading the struggle forward , it too became contaminated with factionalism and flunkeyism . The self-styled communists  formed three or four factions , each one tried to get recognition from the COMINTERN . These factions were drawn from the middle class and bourgeoisie  and out of touch with the ordinary people . The factionalist -flunkeys acted as a block on the revolutionary struggle.

The odds were stacked against the Korean people and the dream of an independent Korea . However the young KIM IL SUNG was not daunted , he knew no defeatism or compromise but resolved to lead the struggle for independence but in a new dynamic way .He rallied the new generation of youths and students  who were not contaminated with the stale dogmas of flunkeyism , factionalism , national reformism and opportunism . In 1926 he formed the Down With Imperialism Union , the first true communist revolutionary organisation in Korea . Then in 1932 he formed the Anti-Japanese People’s Guerrilla Army and later in 1936 the Association for the Restoration of the Fatherland , a united front body , was founded .

President KIM IL SUNG created the Juche idea , the idea that the popular masses are masters of the revolution and construction , the idea of relying on one’s own efforts . He applied it to great effort in the anti-Japanese armed struggle.

In August 1945 the dream of liberation and independence came true . Japanese colonial rule was smashed and a new Korea rose up on the ashes of Japanese imperialism . President KIM IL SUNG set about building a new People’s Korea , a socialist paradise . However again he and the Korean people faced innumerable obstacles . Korea had been divided by the US imperialists who now occupied south Korea and were adamantly hostile to building a people’s democracy in the northern part of Korea .The US created a puppet regime in south Korea. Korea was sandwiched between big powers the USSR and China . Some wanted to copy the USSR . Some people did not want People’s Korea to build its own munitions industry or an independent economy . President KIM IL SUNG pushed aside these false arguments and made sure that an independent munitions industry was created and put forward the line of building an independent economy for the first time in the world . In 1948 he founded the Democratic People’s Republic of Korea (DPRK ) defying the US imperialists and the south Korean puppets .

Then in 1950 the Korean people found themselves fighting against the colossus of US imperialism , not just the US but the south Korean puppets but troops of 15 satellite countries of the US . It was a David and Goliath struggle . It is known as the Fatherland Liberation War .The US carpet bombed the DPRK, carried massacres of civilians that made the Nazis look like a Vicar’s Tea party and even used biological weapons .  However the great leader  President KIM IL SUNG declared that the Americans had misjudged the Koreans and led his people to victory over the US aggressors.

After the Fatherland Liberation War Korea was devastated beyond the imagination ; only three buildings were left standing in Pyongyang .  Worse still a few years ago the war factionalist traitors inside the Workers Party of Korea tried to block the implementation of policies based on Juche and worse still tried to overthrow the leadership . At the end of the 1950s the international communist movement and socialist camp split . Again the Korean people found the cards were stacked against them but President KIM IL SUNG was not dispirited at all .He believed in the Korean people , he believed in Juche . He declared the need to establish Juche . He defeated the factionalists . He rallied the people to carry out socialist industrialisation and firmly established an independent national economy.

Lastly , when the USSR collapsed in the early 1990s and some people thought the DPRK would not survive , President KIM IL SUNG held high the socialist red flag of Juche and made sure that the DPRK kept on the socialist rails .

One could  give more examples but time does not permit . Lets remember a great and heroic leader , President KIM IL SUNG , who put his country back on the world map.

Official Delegate KFA for the UK

President of the Association for the Study of Songun Politics