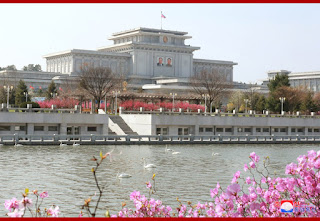 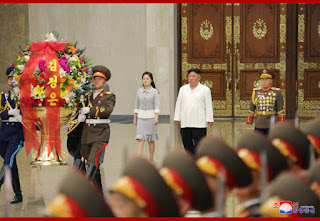 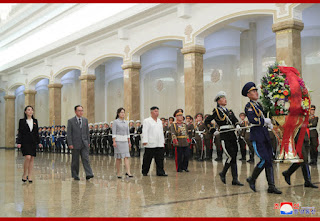 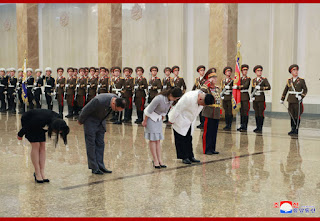 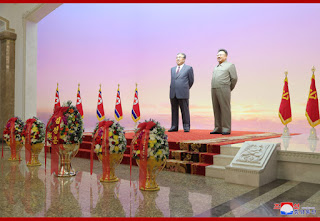 Pyongyang, April 16 (KCNA) -- Kim Jong Un, general secretary of the Workers' Party of Korea (WPK) and president of the State Affairs of the Democratic People's Republic of Korea (DPRK), visited the Kumsusan Palace of the Sun, together with his wife Ri Sol Ju, on April 15, the Day of the Sun (birth anniversary of President Kim Il Sung), the greatest auspicious holiday of the nation.

Placed at the statues of President Kim Il Sung and Chairman Kim Jong Il was a floral basket in the name of the respected Comrade Kim Jong Un.

Kim Jong Un, together with his wife, paid high tribute to the statues of Kim Il Sung and Kim Jong Il and extended the best wishes of immortality at the halls where the President and the Chairman lie in state.

He recollected with deep emotion the noble revolutionary careers and immortal exploits of Kim Il Sung and Kim Jong Il who, regarding "The People Are God" as their mottos throughout their lives, made a new history of Juche Korea making steady victorious progress by dint of the people-first doctrine and provided the eternal foundation for the happiness of all generations to come. -0-