ASSPUK, BGSJI , UK KFA and BSCPRKP on the 61st anniversary of the April popular uprising in south Korea 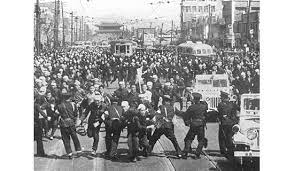 Today Association for the Study of Songun Politics UK(ASSPUK), British Group for the Study of the  Juche Idea(BGSJI)  , the UK Korean Friendship Association(UK KFA) and the British Solidarity Committee for Peace and Reunification (BSCPRKP),issued a joint statement on the occasion of the 61st anniversary of the April Popular Uprising in south Korea.(referred to in south Korea as the "April 19th Revolution").
61 years on the 19th of April 1960  a mass uprising against the corrupt rule of south Korean puppet fascist dictator Syngham Rhee took place in April 1960 .Rhee had lived in the US in the 20s and 30s and had been brought back to south Korea in the 1940s by the Americans as their puppet.His rule was oppressive, corrupt and dictatorial and also turned south Korea into a colony and dependency of the US. Millions were killed by the Syngham Rhee puppet regime. 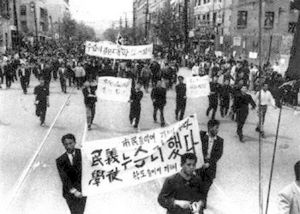 The April popular uprising was an explosion of the peoples wrath against Syngham Rhee and against the colonial rule of the US in south Korea.It was an anti-US anti- fascist struggle as well as a struggle for the independent reunification of Korea.   As the great leader President KIM IL SUNG said

"The massive Popular Uprising in April 1960, in which the student youth of south Korea played the central role, overthrew the puppet government of Syngman Rhee, an old minion of US imperialism. This was an initial victory in the south Korean people’s struggle, and it dealt a heavy blow to the colonial rule of US imperialism.
The collapse of the puppet Syngman Rhee government signified, above all, the bankruptcy of all its anti-popular policies and its notorious “march north” outcry.

In their heroic struggle the people of south Korea demonstrated the revolutionary mettle of the Korean people, gained valuable experience id lessons and were greatly awakened politically.
After the April Popular Uprising, the situation in south Korea rapidly developed in favour of the revolution, and the masses became ore courageous to fight against US imperialism and its lackeys, for the dependent, peaceful reunification of the country" 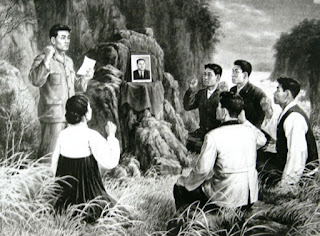 The April Popular Uprising was a great anti-fascist , anti -imperialist uprising that opened a new chapter in the  history   of the struggle of the south Korean people for independence, democracy and reunification. It showed that  the'peaceful road' to change is but an illusion and that only by a violent uprising can the popular masses liberate themselves and achieve independence
The April Popular Uprising was a great inspiration to the peoples of Asia in their liberation struggle and also to national liberation struggles throughout the world.
Our organisations solemnly remember those who died in the struggle and pay a high tribute to their memory.The spirit of the April Popular uprisers is still alive today.
We support the just struggle of the south Korean people against the revival of ultra-rightist , conservative and fascist forces in south Korea  and also the struggle of the Anti-Imperialist National Democratic Front of south Korea for independence  , democraticisation and reunification.
LONG LIVE THE MEMORY OF THE APRIL POPULAR UP-RISERS !