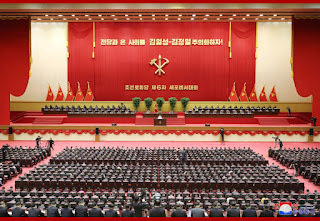 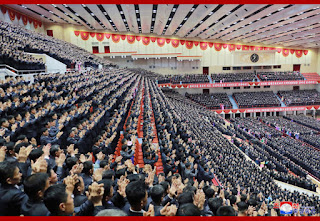 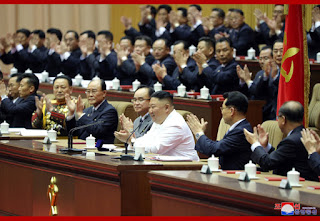 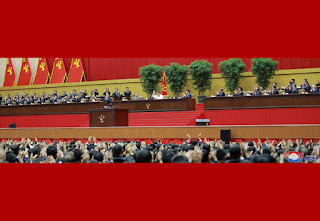 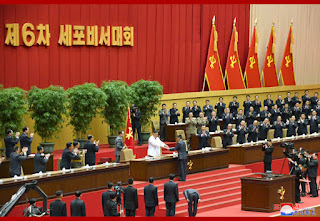 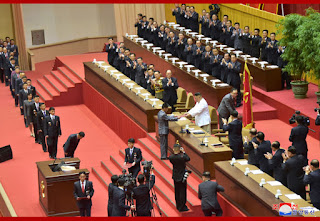 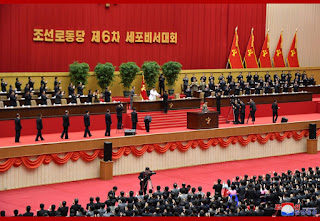 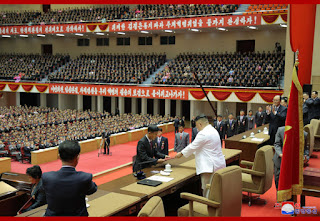 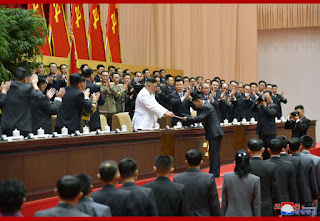 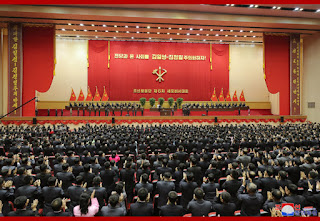 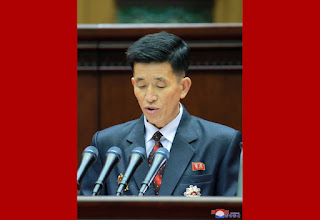 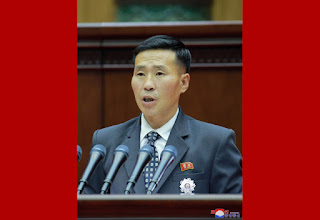 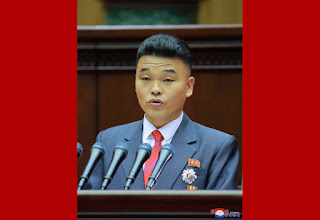 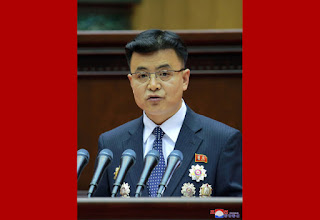 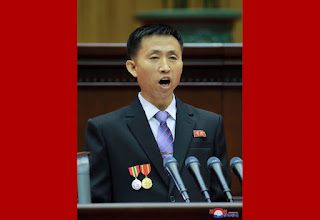 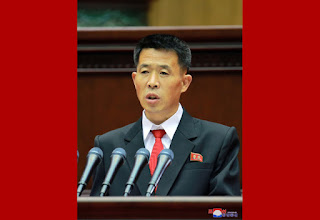 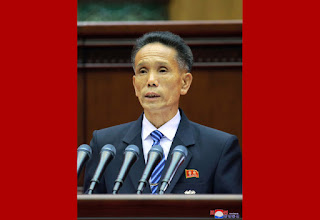 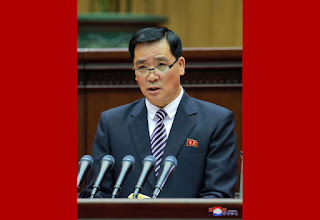 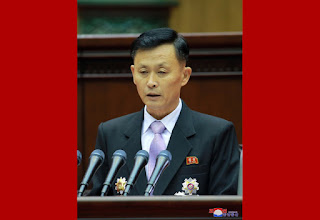 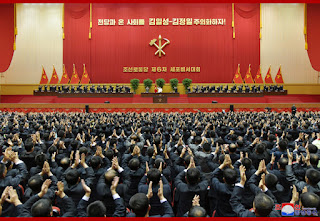 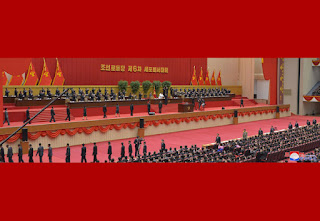 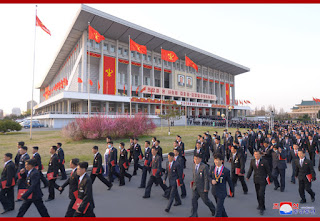 Pyongyang, April 9 (KCNA) -- The 6th Conference of Cell Secretaries of the Workers' Party of Korea (WPK), which is of great significance in the implementation of the decisions of the historic 8th Congress of the WPK and the organizational and ideological strengthening of the whole Party, closed on April 8 after successfully attaining its goal amid high political enthusiasm of the participants.

The third-day sitting of the conference took place amid the participants' high-degree political consciousness and fervent revolutionary zeal to discharge their missions and duties as standard-bearers implementing the Party policies in the glorious struggle for the prosperity and development of our socialist state, true to the Party Central Committee's noble intention of regarding it as its top priority task for strengthening the whole Party to develop its cells.

Kim Jong Un, general secretary of the WPK, took the platform with secretaries of the WPK Central Committee to guide the third-day sitting of the conference.

All the participants in the conference raised stormy cheers in honor of Kim Jong Un who is enhancing the leadership and fighting efficiency of the great Kimilsungist-Kimjongilist Party in every way by constantly increasing the function and role of the basic organizations of the Party, as required by a period of new development, a period of a new leap forward, of our revolution.

Speakers referred to their successes and experience in their positive efforts to concentrate on the work among the people and to acquire the personality and working method befitting the primary political workers of our Party, as required by the principal mission and duty of a Party cell secretary.

The Party cell of the forest supervision branch office in Thongsan area under the Forest Management Station in Pyoksong County, an important post on the front of forest restoration, made sure that all its members take good care of forests by applying the methods proper to its specific conditions to guiding their Party life. Thus, the cell was honored with the title of loyal cell.

The participants were deeply moved by the experience gained by the Party cells of the second work-team of the Workshop No. 3 under the Taesong External Constructor Training Station and the second mountainous district work-team of the Sokmak Timber Felling Sub-station under the Hwaphyong Forestry Station which turned the work-teams into united and competent groups by devoting themselves to comrades, bearing deep in mind the General Secretary's earnest instructions that if Party cell secretaries are to fulfill their role, they should serve like a real mother of family.

The Party cell of the technical section of the Chollima Tile Factory, by intensifying the political work to enlist the workers' spiritual strength, made a tangible contribution to realizing the domestic production of finishing building materials. Thus, they proved in practice that nothing is impossible as long as there are Party members, strong in their genuine patriotic conscience and spirit of self-reliance, at the sci-tech post.

The participants were also touched by the experience gained by a Party cell of the August 21 Factory that has distinguished itself in the implementation of the Party decisions by firmly arming its members with the fighting tradition of devotedly carrying out Party polices and by waging a mass technical innovation campaign.

The participants kept in mind once again that the success or failure in the implementation of the Party's policies depends on the role of Party cells, hearing speakers saying it is possible to effect collective innovation and give full play to popular heroism when efforts are concentrated on developing the Party cell into a loyal cell, vanguard detachment for the implementation of the Party's policies and all its members pool their efforts, helping and leading one another forward.

Seriously criticized and reviewed at the conference were the mistakes revealed by some Party cells which failed to meticulously conduct the organizational work, control and guidance for strengthening Party cells, to effectively do the education in the leadership feats of the Party, and to acquire a proper revolutionary mass viewpoint.

Speakers said they learned the lessons that if Party cell secretaries fail to hold fast to the key point of the Party work and to acquire the personality and ability suitable for primary political worker, the practical ability of the basic organizations of the Party will not meet the demands of the Party, people can not share their intentions and it is impossible to give full play to their collective wisdom and creativity.

The participants studied practical ways for turning their Party cells into united and militant groups, reviewing their work in combination with excellent experience and lessons mentioned in the speeches.

Speakers at the conference expressed their firm will to fulfill their responsibility and duty by more actively and responsibly conducting the work for strengthening Party cells, cherishing the honor of being called the hard-core members, primary political officials, of our glorious Party.

Kim Jong Un, general secretary of the Workers' Party of Korea, made a historic conclusion.

Very positive achievements were made in the work of strengthening the Party cells since the historic 5th Conference of Cell Chairpersons of the WPK, he said, speaking highly of the devoted efforts made by cell secretaries who have contributed to the strengthening of the revolutionary ranks and the socialist construction despite difficulties.

When all the cells of the Party remain faithful and are as strong as steel, there will be no hardship and fortress insurmountable in the revolutionary struggle whatever the challenge and ordeals, but if the Party cells are weak and fail to properly function, so great will be the consequences to be entailed by it, he said, referring to major shortcomings found in the work of some Party cells.

He set forth 10 major tasks facing the Party cells and 12 major personalities to be possessed of by cell secretaries for the present and clarified the task of Party organizations at all levels for helping the cell work.

He said that so great is the expectation of the Party Central Committee on cell secretaries, expressing the conviction that the Party cell secretaries across the Party would work heart and soul to turn their cells into healthy and wholesome ones whose members are firmly united with unusual resolution, determination and fighting spirit and thus further cement our Party organizationally and ideologically and powerfully propel the all-people advance toward a new victory of socialist construction.

As the General Secretary finished his speech, all the participants broke into stormy cheers of "Hurrah!", extending the highest glory and warmest thanks to him who has ushered in a new heyday of strengthening Party cells by indicating the correct path toward the comprehensive development of the basic Party organizations with his profound thought and brilliant ideo-theoretical wisdom.

Testimonials of the General Secretary of the WPK were conferred on exemplary Party cell secretaries.

Kim Jong Un made a closing speech of the 6th Conference of Cell Secretaries of the WPK.

The conference proved once again the significance and importance of strengthening the Party cells in consolidating as firm as a rock the unity and cohesion in thought and will throughout the Party and powerfully accelerating the socialist construction, he said, noting that the 6th Conference will be clearly recorded in the history of Juche-oriented Party building as a significant conference that developed and enriched the our Party's unique idea of building basic organizations and helped Party cell secretaries within the whole Party with correct action program.

Kim Jong Un expressed his firm pledge to repay at any cost the trust put by the people who invariably trusted and followed him whether they are in weal or woe, and ardently appealed to all Party officials and Party cell secretaries to work with redoubled efforts, so as to be honest before the great appellation called the motherly Party, the tremendous power of the WPK and symbol of its invincibility as well as the title and name peculiar to it, and eternally preserve and glorify the honor of being its members.

Expressing belief that the participants and other Party cell secretaries across the Party would enshrine the basic idea and tasks of the Conference and make total dedication to the strengthening and development of Party cells and thus make an active contribution to the strengthening of the entire Party and the unity of the whole Party, Kim Jong Un declared the 6th Conference of Cell Secretaries of the WPK closed.

The participants were full of high enthusiasm to definitely turn Party cells into ranks of vanguard fighters in devotedly implementing the Party's policies and thus make contribution to steadily enhancing the unity and fighting efficiency of the entire Party true to the revolutionary idea and leadership of the General Secretary.

The conference guided by the respected Comrade Kim Jong Un, general secretary of the Workers' Party of Korea, marked a significant occasion in further reinforcing the foundations of the Party, consolidating the revolutionary ranks into invincible ones and thus modeling the whole Party and the society on Kimilsungism-Kimjongilism and in making an epochal advance in carrying out the decisions of Party congress and the socialist construction. -0-