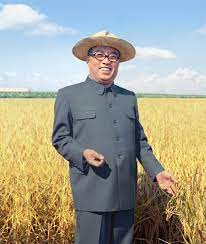 President KIM IL SUNG whose birth anniversary April 15th will be celebrated by the Korean people and progressive people as the Day of the Sun , actually came from a very humble background . He was born at Mangyongdae near Pyongyang the son of a poor peasant and lived in a simple thatched home which has been preserved in its original state for visitors from not only Korea but all parts of the world to see . 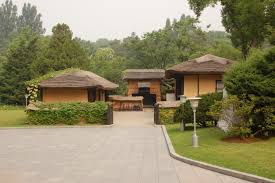 Coming from a simple farming family President KIM IL SUNG devoted a lot of effort and energy into guiding agriculture in People’s Korea .

After liberation in 1945 keenly feeling the hunger of the Korean working farmers for their own land and to be free from the suffocating oppression of the landlords and feudalism , President KIM IL SUNG made Agrarian Reform the order of the Day and it was carried out within the space of 20 days in March 1946 . Land was distributed free of charge to landless and land-short  working farmers . At the same time no compensation was paid to the former landlords . It was a very radical land reform which not only freed the peasants from the oppression and exploitation by the landlords but it freed the agricultural productive forces from the shackles of feudalism and land landlordism . 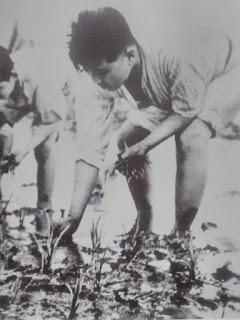 President KIM IL SUNG himself went to the Mirim plain to transplant rice seedlings with the farmers in 1947.

As a result of the land reform and the efforts of the new people’s government to improve agriculture the   production of grain shot up. Grain production increased by 151 percent between 1946 and 1949 .Once the northern part of Korea had suffered from food shortages all the time because of the limited area of arable land but it became self-sufficient in grain .

After the Fatherland Liberation War against the US imperialists (1950 -1953) agricultural collectivisation became the order of the day . In fact it was a vital need in order to overcome the devastation of rural areas during the war . President KIM IL SUNG put forward a unique Juche-based line of agricultural co-operativisation . However some dogmatic factionalists tried to oppose it invoking the experience of other countries or quoted from classic Marxist Leninist texts or even said the cooperativization could not take place until the country was reunified . President KIM IL SUNG brushed aside this nonsense . Cooperativization was started in 1954 and completed by 1958 , in the space of 4 years . Agriculture by 1958 was 100 percent cooperativised . The USSR had not fully collectivized by 1936, 8 years after the start of collectivization and Albania which had proclaimed itself the ‘only socialist country in the world ‘ took 20 years to complete collectivization .

President KIM IL SUNG did not stop at cooperativization , he totally revolutionised agriculture in the DPRK . He presented the Theses On the Socialist Rural Question in Our Country  to a plenary meeting of the central committee of the Workers' Party of Korea on the 25th of February 1964 . He paid forward the following three basic principles to be adhered to

“First, the technological, cultural and ideological revolutions should be thoroughly carried out in the rural areas;

“Second, the working-class leadership of the peasantry, the assistance of industry to agriculture, and the support of the towns to the countryside should be strengthened in every way;

He taught the main contents of the revolution to be carried on in the countryside after the establishment of the socialist system, the basic way of eliminating the distinctions between towns and countryside, and the basic direction for realizing the organic combination between cooperative proper­ty and all-people property.”

These were very revolutionary policies . They were in complete contrast to the revisionist countries where the ties between all-people property and co-operative were deliberately weakened with the guidance of the state in agriculture being neglected.

These three basic principles were buttressed by a programme of investment  and construction in rural areas and the improvement of people's living standards.  The rural theses put forward the idea of constructing houses for the farmers at state expenses and allocated them to the farmers free of charge . Also the tax in kind was to be abolished. These were unprecedented measures unknown in the world .Irrigation ,mechanization  and electrification were carried out . The DPRK became self-sufficient in food by the early 1960s. Thus the socialist countryside of the DPRK became a paradise without taxation , exploitation or oppression .

The “Theses on the Socialist Rural Question “ was acclaimed by the revolutionary and progressive people of the world as a textbook for socialist agriculture. A representative of the TriContinental Peoples Solidarity Organization said that “This is our textbook. Real socialism must be constructed as it is being built in Korea”. A Tanzanian said that the Rural Theses was “ an example that which all independent countries building a new life must learn from “.

President KIM IL SUNG also created the great Juche farming method in the 1970s which in simple terms can be summed up as the ‘right crop in the right soil , at the right time .In 1974 the DPRK hit the target of 7 million tons of grain despite the unfavourable weather conditions . The DPRK actually became an exporter of grain . In 1984 the DPRK produced an astonishing 10 million tons of grain , 5.3 times  of what was produced in 1946.

Despite the severe setbacks experienced by DPRK agriculture in the mid 1990s, which was caused by severe natural disasters and the imperialist sanctions, grain production has increased for the last 3 years . 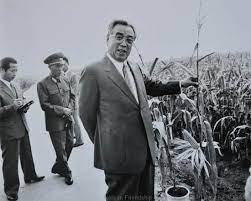 Although the imperialists and reactionaries have slandered the DPRK's Juche-based socialist agricultural system  even talking about "famine ". However  although DPRK agriculture suffered setbacks in the 1990s , the DPRK's rate of self-sufficiency in food was still higher than that of Japan which has only 33% self-sufficiency in food and south Korea which has 55%. South Korea’s grain imports have more than tripled from 3.65 million tons in 1978 to12.5 million tons in 2011, this shows the massive failure of south Korean agriculture which used to be the granary of Korea rather than the mountainous north.

President KIM IL SUNG’s name is associated with the great developments in agriculture in People’s Korea and he will be remembered as a great builder and teacher of socialist agriculture.

Chairman British Group for the Study of the Juche Idea .