ASSPUK, BGSJI, UK KFA and BSCPRKP on the 3rd anniversary of the April 27th Panmunjom Summit and Declaration. 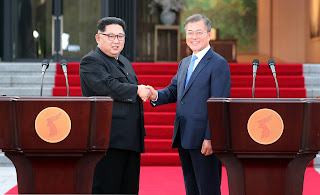 London 22nd  of April Juche 110((20201)
The Association For the Study of Songun Politics UK(ASSPUK) ,British Group for the Study of the  Juche Idea(BGSJ) , the UK Korean Friendship Association(UK KFA) and the British Solidarity Committee for Peace and Reunification on the Korean Peninsula (BSCPRKP)today issued the following joint statement on the 3rd anniversary  of the historic April 27th Panmunjom summit and joint declaration :
Three years  ago on a bright April spring day there took place at Panmunjom a summit between the leaders of the DPRK and south Korea.. The April 27th Summit is a great landmark in the history of the struggle for Korean reunification.Thanks to the hard-working efforts of respected Marshal KIM JONG UN who worked tirelessly for the cause of reunification , earnestly implementing the teachings of the great leaders comrades KIM IL SUNG and KIM JONG IL on Juche-based Korean reunification , the summit at Panmunjom was held on the 27th of April 2018 and a joint declaration was signed. Previously inter-Korean relations had been frozen for a decade owing to the negative actions of the ultra-right conservatives in south Korea . In fact inter-Korean relations had not only been frozen but had become very tense due to the previous Park Geun Hye fascist regime and the reactionary US imperialists .

Respected Marshal KIM JONG UN adroitly defused the tensions on the Korean peninsula and boldly met the south Korean chief executive at Panmunjom . The summit produced the Panmunjom
Declaration which was a ray of light penetrating the dark storm clouds of war that were hanging over
the Korean peninsula and the world .
The Panmunjom Declaration basically reaffirms the principles of independent reunification and paves the way for a lasting peace on the Korean peninsula as well the final independent reunification of the Korean nation.
However , regrettably the implementation of the Panmunjom joint declaration has not been effected because of the interference of the US including their unjust sanctions on the DPRK . Also
the south Korean reactionary conservative forces have been obstructive.
.We hope that all barriers to reunification will come down finally.
KOREA IS ONE !
ASSPUK
BGSJI
UK KFA
BSCPRKP