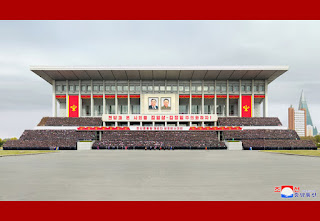 Pyongyang, April 14 (KCNA) -- Kim Jong Un, general secretary of the Workers' Party of Korea (WPK), had a photo session with the participants in the 6th Conference of Cell Secretaries of the WPK on April 13.

The venue of the photo session was full of great reverence and trust of the participants in the respected Comrade Kim Jong Un who energetically guided the 6th Conference of Cell Secretaries to make it an occasion for epoch-making advance in the strengthening of the whole Party by indicating the undying great programme for consolidating the fighting efficiency and power of Party cells in every way, and repeatedly bestowed upon them unforgettable loving care and trust which will be conveyed down through generations.

When Kim Jong Un appeared at the venue, all the participants raised stormy cheers of "Hurrah!", extending the highest glory to him who has further strengthened our Party into the powerful militant General Staff of the revolution, the invincible steel-strong Party taking a firm hold upon people's minds, and into the great mother party with the people-first principle as its lifeline with his rare and outstanding leadership.

Waving back to the enthusiastically cheering participants, he extended warm and encouraging respects.

Expressing his belief that all the cell secretaries, bearing deep in mind the idea of strengthening the Party cells and achieving unity in the Party cells, and tasks set forth in the Conference, would make redoubled efforts to further strengthen hundreds of thousands of Party cells into healthy and viable ones closely knitted in the bonds of kinship, advance groups for implementing the Party policy which would dynamically promote the on-going general advance, he had a photo taken with them against the venue of the conference.

All the participants refreshed their iron will to make positive contributions to bringing earlier a fresh victory of the socialist construction by decisively implementing the decisions of the 8th Party Congress, extending their deep gratitude to the respected General Secretary who encourages secretaries of party cells to fulfill their honorable mission and duty as core members of our Party. -0-