ASSPUK, BGSJI, UK KFA ,and BSCPRKP on the 89th anniversary of the foundation of the KPA as the Korean People's Revolutionary Army

London 19th  of April Juche 110(2021)
The Association For the Study of Songun Politics UK(ASSPUK), the  British Group for the Study of the  Juche Idea(BGSJI) , the UK Korean Friendship Association(UK KFA) and the British Solidarity Committee for Peace and Reunification on the Korean Peninsula (BSCPRKP)today issued the following joint statement on the occasion of the 89th anniversary of the foundation of the Korean People's Revolutionary Army(KPRA) the forerunner of the modern Korean People's Army on the 25th of April.
The Korean People's Army of today has its origins in the Anti-Japanese People's Guerrilla Army founded on the 25th of April 1932 , we Juche Idea and Songun idea followers salute the anniversary of its foundation . Today the KPA is defending the independence of the DPRK and also peace and security in the Asia-Pacific region. 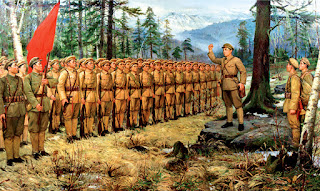 The foundation of  Anti-Japanese Peoples Guerrilla Army, in 1932, by the great leader comrade Kim Il Sung, a gifted military strategist and ever -victorious iron willed brilliant commander, constitutes the bedrock of the Songun revolution .
The Korean People’s Army, under the wise leadership of the great leader generalissimo Kim Il Sung, took over and carried forward the traditions of the anti Japanese armed struggle. It is based solidly on revolutionary comradeship. Moreover a tradition of army -people unity was created and today flourishes in Juche Korea. 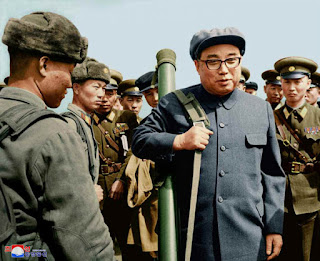 Under the wise leadership of the great generalissimo's  Kim Il Sung and Kim Jong Il the KPA grew into steel strong ranks each soldier being a match for a hundred enemy soldiers.The KPA inflicted a crushing defeat on the US imperialists in the great Fatherland Liberation War of 1950-1953.The KPA also defeated the US in the ‘Pueblo incident’,'EC121 incident’, ‘Panmunjom incident’ of 1976 and the 1994 helicopter shoot down incident.

The KPA became a truly Juche- orientated revolutionary armed force and is the army of the party,the working class and the leader. New theories of warfare have been created.'Moreover under the leadership of the great leader generalissimo Kim Il Sung ,the KPA stuck to class and revolutionary principles, the revisionist and opportunist " non class" theories were soundly smashed, The leadership of the party over the armed forces was maintained and enhanced unlike some countries where socialism was frustrated.The KPA is truly an anti-imperialist , anti revisionist army which defends socialism with the force of arms.
The might of the KPA was further strengthened under the leadership of supreme commander Kim Jong Il ,who practised Songun politics giving priority to the KPA regarding it as the central pillar of the revolution. The KPA under the Songun revolutionary leadership of the great leader the KPA grew stronger in terms of ideology and politics but also materially. It is now equipped with the latest weaponry and has its own independent deterrent force. The KPA under the command of the Songun supreme commander Kim Jong Il and respected general Kim Jong Un smashed the provocations of the south Korean puppets in November 2010 turning Yongphyong island into a sea of flames.
Respected Marshal Kim Jong Un  has implemented the great revolutionary line of building the economy and nuclear force in parallel thereby strengthening the nuclear deterrent force of the KPA
exponentially so that the DPRK became a strategic state. 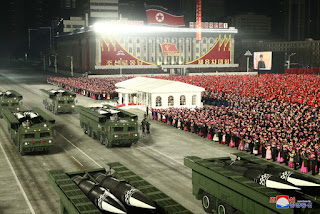 The KPA which holds tight the arms of Songun has been ever-victorious over a period of eight decades. The KPA , the vanguard force of the Songun revolution, has defeated the imperialists many times, and under the leadership of supreme commander Kim Jong Un will defeat them again.
The glorious KPA which inherits and continues  the traditions of the Korean People's Revolutionary Army is the guerrilla army of dear respected Marshal Kim Jong Un ready to win the  great war for national reunification.
Today the destiny of world socialism and peace  depends on the rifles of the Korean People's Army headed by respected supreme commander Marshal Kim Jong Un. The DPRK is on the frontline of the struggle between socialism and imperialism. It stands guard over the independence of the DPRK and the people-centred socialism , the authentic socialism.  Under the command of respected Marshal Kim Jong Un, the Korean People's Army has been further strengthened as the mighty and invincible revolutionary armed force of Juche . We are convinced of the final victory of the KPA led by respected Marshal Kim Jong Un.
ASSPUK
BGSJI
UK KFA
BSCPRKP