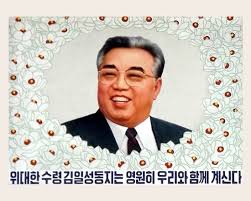 The Association for the Study of Songun Politics UK and the British Group for the Study of the Juche Idea  published the following joint statement on the occasion of the 9th  anniversary,on the 20th of April of the publication of the work "The Great Kim Il Sung Is the Eternal Leader of Our Party and Our People" by the dear respected leader Marshal  Kim Jong Un on the 20th of April 2012;
Dear respected Marshal Kim Jong Un in the  work makes it clear that the people of the DPRK  will uphold the great leader President Kim Il Sung as their eternal leader . President Kim Il Sung was truly unique as his revolutionary career started in his teens and ended in his 80s, his life spanned the 20th century  Moreover as dear respected comrade Kim Jong Un points out in the work ;

"He was a great leader of the people, who put forward the masses, once oppressed and exploited, as the master of history, and raised their dignity and value to the highest level possible.

His was a noble life of a people’s leader, who regarded “The people are my God” as his motto, applied it to his ideas and leadership and turned it into reality. For him, the masses of the people were always a teacher, and he was their loyal son. He began his revolutionary activities by going among them; the revolutionary activities were conducted always by relying on them, and they were dedicated, from beginning to end, to defending and achieving their independence. Thanks to these activities, the masses’ demand and aspiration for independence became ideas, theories, lines and policies, and the most revolutionary and scientific guidelines, which were easily understood by them and which indicated the true roads for them to take to shape their destiny, were provided."
This distinguishes President Kim Il Sung from other political leaders and statesmen of the 20th century. It was not simply the fact that the great leader President Kim Il Sung's career spanned the century but his unswerving adherence to independence as well as his deep love for the people  which were intimately inter-twinned. President Kim Il Sung was the greatest of great leaders.
As dear respected comrade Kim Jong Un explains the road of the DPRK was not an easy one but an acute struggle, a class struggle against the various forces that schemed to hold back or stifle the DPRK such as imperialism , sycophancy , dominationism and revisionism . he DPRK is the legacy bequeathed by the great leader President Kim Il Sung. The socialism of the DPRK established by the great leader comrade Kim Il Sung is the most independent socialism which combines socialism with the national character and independence therefore it is  the most invincible and  durable socialism. Juche socialism is real socialism
In the work the dear respected leader Marshal Kim Jong Un Chairman  of the Workers' Party of Korea maintains that the DPRK and WPK must follow the road of independence,Juche and socialism.
"The times may pass and we may encounter ordeals, but we must invariably advance along the road of independence, the road of Songun and the road of socialism, which Kim Il Sung and Kim Jong Il followed throughout their life, and thus fulfil the mission and duty as befits the descendants of Kim Il Sung and soldiers and devoted followers of Kim Jong Il"
This is a sledgehammer blow to those who want to derail Juche-orientated socialism .It is a militant declaration that the DPRK will follow the road charted by the great leaders generalissimo's Kim Il Sung and Kim Jong Il. Dear respected Marshal Kim Jong Un has strongly upheld the continuity of the great leader comrade Kim Il Sung's leadership and is leading the struggle to dye the whole of society with the monolithic ideological of Kimilsungism-Kimjongilism.
Nine years have passed since the publication of the work   "The Great Kim Il Sung Is the Eternal Leader of Our Party and Our People " during which its validity and correctness has been proved with each passing day. It   charts the road ahead for the DPRK  as well Juche idea followers of the world. We highly commend the work and call for an intense study of it.