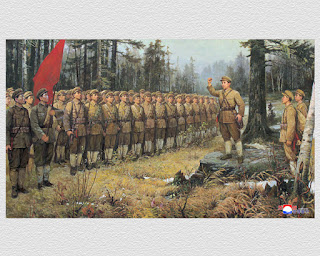 It is said that from little acorns grow mighty oaks  , the Korean People’s Army which today stands guard over the independence of People’s Korea and its great socialist achievements , can be said to exemplify this saying . Today the Korean People’s Army commanded by the  respected leader  Marshal KIM JONG UN is equipped with its own nuclear deterrent as well as Intercontinental Ballistic Missiles and and advanced weaponry as evidenced by the the military parades for the 75th anniversary of the foundation of the Workers’ Party of Korea in October 2020 and for the 8th Congress of the Workers Party of Korea in January .

President KIM IL SUNG founded the Anti Japanese People’s Guerrilla Army  on the windswept plains of Manchuria , literally out of nothing , with bare hands as the Anti-Japanese guerrillas did not have a state or a rear base to rely upon . As President KIM IL SUNG said in his speech ‘On the Occasion of Founding the Anti-Japanese People's Guerrilla Army’

‘ We are now fighting against formidable Japanese imperialism under difficult circumstances, with neither home front nor foreign aid.’

The AJPGA fought in the spirit of self-reliance . They made their own hand grenade , the Yongil bomb , when others did not heed their request for a grenade factory .

The AJPGA became the Korean People’s Revolutionary Army in March 1934.  Under the command of the great leader President KIM IL SUNG, an ever victorious iron-willed brilliant commander, the stout hearted and heroic guerrilla revolutionary fighters of the KPRA fought many battles against the Japanese imperialist  aggressors such the battle of Pochonbo  and the battle of Musan to name just a few . Korea was liberated from Japanese imperialist rule on the 15th of August 1945 after the KPRA together with Soviet troops advanced into Korea after President KIM IL SUNG gave the order for the final operation for liberation on the 9th of August 1945.

The KPA had  a baptism of fire in the three year long Fatherland Liberation War which was provoked by the US imperialists and the south Korean puppets in June 1950 .  The US and their puppets has hoped that the element of surprise would give them an advantage but the KPA beat them back Under the command of President KIM IL SUNG the KPA fought like fearless tigers smiting the Yankee aggressors . Within the space of two months the KPA had liberated 90 percent of the territory of south Korea and 92 percent of the population  , a truly amazing feat unparalleled in history . In the end the US had to sue for armistice talks and  the US was defeated by the KPA under the command of President KIM IL SUNG.

The US imperialists and south Korean puppets despite their massive defeat in the Fatherland Liberation War never gave up the idea of conquering the DPRK by military force .

President KIM IL SUNG resolved to build up the KPA even stronger than before . Keenly aware , particularly after the Cuban missile crisis in 1962 , that People’s Korea could not trust its defence to outsiders , instead  he put forward the line of combining the building of the national economy with the line of building national defences . At the same time the KPA was to be built into a cadre army and an army in which every soldier would be equal to a hundred enemy soldiers  . He ensured that the KPA was not only strong in weaponry but in ideology .

It was in the 1960s that chairman KIM JONG IL began his Songun or army first revolutionary leadership at the historic Seoul Ryu Kyong Su no 105 Tank division of the KPA .

Under the leadership of President KIM IL SUNG and Chairman KIM JONG IL the KPA was greatly strengthened . It defended the independence of People’s Korea in the numerous confrontations with the US imperialists after the Fatherland Liberation War , for example the ‘Pueblo Incident ‘ of 1968  , the EC121 spy plane incident of 1969, the Panmunjom Incident of 1976 , the 1994 Helicopter shootdown incident  and the confrontation with the US over the nuclear issue .

It was under the leadership of Chairman KIM JONG IL that the KPA came to acquire the nuclear deterrent  and  Intercontinental Ballistic Missiles. 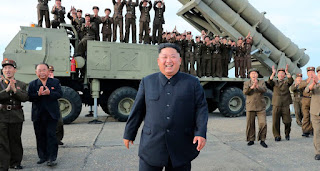 Respected Marshal KIM JONG UN who became supreme commander of the KPA in December 2012 pushed ahead with the work of strengthening the KPA . He visited many far flung outposts of the KPA , often right under the nose of the enemy .He guided the KPA through periods of intense confrontation with the US in 2013 and 2015 . Under the leadership of respected Marshal KIM JONG UN the DPRK crossed the nuclear finishing line .

Today the KPA is an army strong in ideology , weaponry and morale . It is an army feared by the US imperialists and other reactionaries . The very mention of the name Korean People’s Army causes the imperialists to shake with fear From its beginnings in 1932 as a guerilla force  , guided by President KIM IL SUNG , Chairman KIM JONG IL and Marshal KIM JONG UN , it has grown into an invincible and ever-victorious army  .