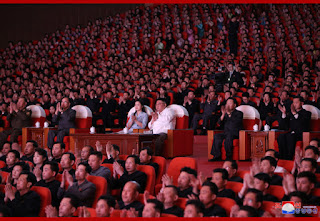 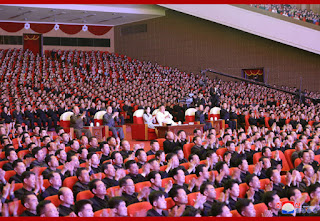 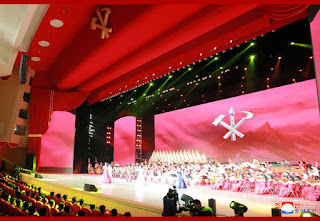 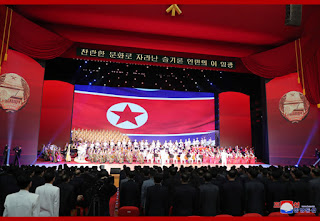 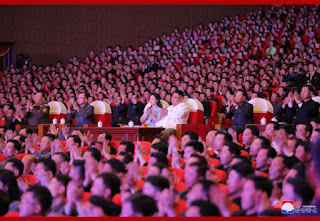 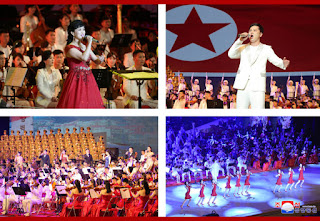 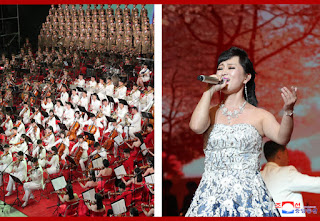 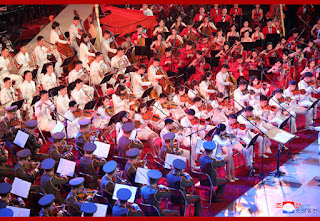 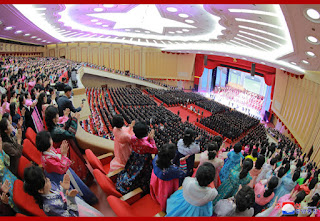 Pyongyang, April 16 (KCNA) -- Kim Jong Un, general secretary of the Workers' Party of Korea (WPK) and president of the State Affairs of the Democratic People's Republic of Korea, on Thursday watched joint performance "Along the Party Forever" given by major art troupes in celebration of the Day of the Sun.

When the respected General Secretary Kim Jong Un came to the auditorium of the theater with his wife Ri Sol Ju amid the playing of welcome music, all the participants raised enthusiastic cheers of "hurrah!" in deep reverence for him who is consolidating the guiding force and militant efficiency of the great Kimilsungist-Kimjongilist Party in every way and thus vigorously leading the socialist cause along the path of victory.

Watching the performance also were Choe Ryong Hae, Jo Yong Won, Ri Pyong Chol and Kim Tok Hun, members of the Presidium of the Political Bureau of the Central Committee of the WPK, and cadres and staff of the departments of the Party Central Committee and their family members.

The artistes of the major art troupes including the Band of the State Affairs Commission and the State Merited Chorus sang highly of the undying exploits of the Party Central Committee which remarkably strengthened our Party into the powerful militant general staff of the Korean revolution and opened up the new era of self-sustenance and prosperity which is most glorious in the nation's history spanning 5 000 years, with its great ideology and theory and gigantic revolutionary practices.

Enjoying the emotional hymns dating back to the decades characterized by revolution, the audience recalled the greatness of our Party which led the people by dint of its great ideology and strong cohesion despite grim hardships of history to build the large flower garden of people-first-principle on this land and to give birth to an invincible powerful country.

When the performance was over, the audience again broke into stormy cheers for the General Secretary.

All the participants hardened their iron will to make active contribution to ushering in a period of a great upsurge and turn in our revolution by channeling all their efforts into implementing the fighting programme advanced by the historic 8th Congress of the Party, by upholding most steadfastly and most faithfully the revolutionary leadership of the General Secretary who is putting into a brilliant reality the lifelong desire of President Kim Il Sung and Chairman Kim Jong Il. -0-