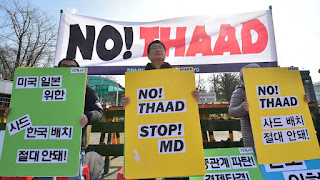 London 10th  of April Juche 110(2021)
The Association For the Study of Songun Politics UK(ASSPUK), the British Group for the Study of the  Juche Idea(BGSJI) , the UK Korean Friendship Association(UK KFA) and British Solidarity Committee for Peace and Reunification on the Korean Peninsula (BSCPRKP) today issued a statement denouncing the deployment of US missiles in south Korea ;

These developments represent an effort by the US imperialists and south Korea authorities  to intimidate and threaten People's Korea as well as to stifle People's Korea by means of military force .It is a grave threat to peace on the Korean peninsula and also the Asia -Pacific region .

The peace movement in the UK and other countries needs to do more to expose warmongering by the US and south Korea .

We demand that the missile deployment is halted and all US weapons and troops are withdrawn from south Korea  !

US OUT OF KOREA !