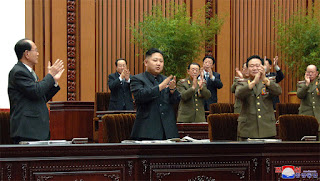 From Voice of Korea website http://www.vok.rep.kp/
Nine years has passed since the respected Kim Jong Un was elected to the supreme post of the Democratic People's Republic of Korea on April 13, Juche 101(2012) according to the general will of the people across the country.
Over the past nine years the Korean people have vigorously advanced towards a new victory of socialist construction despite the suffocation moves of the hostile forces under the leadership of Kim Jong Un.
Kim Jong Un clarified that Kimilsungism-Kimjongilism, the guiding idea of the state, is in essence, the people-first principle, making clear the popular character of the state.
Under his wise leadership, all the state policies are worked out and implemented in a way of giving top priority to and absolutizing the interests of the people to invariably maintain the nature of Korean-style socialism centred on the popular masses.
Modern streets, villages, bases for cultural and emotional life, schools and hospitals for the people were built in all parts of the country. The universal 12-year compulsory education system was enforced and the national crisis control system established to cope with the epidemics and natural disasters. The work to safeguard the lives of the people and train them into more powerful beings was regarded as a top-priority one.
In the DPRK great successes are made consecutively and multiply along with the all-people grand march based on self-reliance.
In those years, the spirit of self-reliance of the Korean people was sublimated onto a higher level under the leadership of Kim Jong Un who led them to hold fast to the principle of national self-respect as the lifeline.
The spirit of self-reliance and self-sufficiency has been firmly kept in the mind of every citizen of the state and it has become social customs.
In the spirit of self-reliance, the Korean people placed the self-reliant defence capability on the highest plane of the world and made a progress in the struggle for independence of the national economy and created a new myth of construction of shortening 10 years to one.
Our famous goods and creations were made in succession amid the efforts for modernization and localization and the socialist emulation drive in all sectors of the country.
Changjon Street was inaugurated in June Juche 101(2012) and afterwards, Unha Scientists Street, Wisong Scientists Residential District, Mirae Scientists Street and Ryomyong Street were built one after another.
Overcoming the suffocation moves of the hostile forces, the Korean people learned to live by their own efforts and the greater trials and difficulties they face, the stronger they get. This is a precious asset for a leap forward in the future.
The Korean people keenly felt that when they support the leadership of Kim Jong Un with loyalty, they can expect the victorious advance of socialism and their rosy future.
It is their greatest fortune and honour to have Kim Jong Un at the head of the state.
Posted by juche007 at 23:10