https://cepsongunbr.com/2020/06/24/quando-os-comunistas-impediram-a-entrada-do-brasil-na-guerra-da-coreia/
June 2020 marks the 70th anniversary of the outbreak of the Korean War, or War for the Liberation of the Motherland, as it is called in the Democratic People's Republic of Korea. And that date brings to mind facts that must always be remembered by the world proletariat in its arduous struggle through the years for self-determination and peace.

The Korean War, which began in 1950, involved the Democratic People's Republic of Korea - an independent country founded by the Korean people in 1948 - and the USA, together with its puppet state in the region, the Republic of Korea (the southern part). The US interest in the war was to liquidate the DPRK's socialist state and achieve political and strategic goals by eliminating the Revolution (which was rapidly spreading around the world) and conquering frontier territories with the USSR and Socialist China.


When the United States incited the Korean War and the conflict spread across the Peninsula, the Yankees summoned all of their lackeys around the world to participate in the conflict at their side. Brazil was not left out of this.

At the time, the Brazilian government of General Eurico Gaspar Dutra was very friendly to the Americans and our nation was “on this side” of the iron curtain of the Cold War. This made President Dutra even support on national radio the sending of Brazilian troops to Korea to fight with the USA.

It turns out that the Brazil of 1950 was already a different Brazil from years ago. Brazil had just fought the Second World War with the sending of the FEB - Brazilian Expeditionary Force - to Europe, where the Pracinhas fought against the fascists and against the fascist political system of domination and aggression.

Many of the Brazilian soldiers who fought in the FEB were organic communists, members of the Communist Party of Brazil (PCB) or sympathetic to communist ideals. The rest returned from Italy with thoughts that were perceived in Brazil as “dangerous”, and there was even a ban on soldiers parading using weapons when they returned from the European theater of operations - such was the Brazilian government's fear of a popular insurrection. 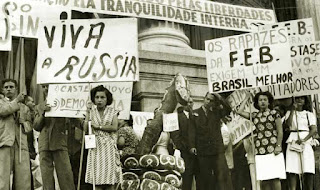 Popular demonstration in support of FEB
In addition, there was a liberal wing in the Brazilian government in the 1950s (which thought the idea of ​​Brazil entering the Korean War was good) and a nationalist wing that disapproved of the possibility of the country becoming involved in such a conflict. According to historian Rainer Sousa , at the time, a nationalist captain of the Brazilian Army, called Humberto Freire de Andrade, even wrote a public article criticizing Syngman Ree's south Korean dictatorial government and praising Kim' Il Sungs popular measures. in People's  , like the agrarian reform, as well as its autonomy, standing directly against Brazil's entry into the conflict. 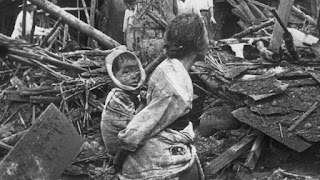 The Korean War was a real atrocity: US forces attacked the small, newborn country with chemical and biological weapons that killed almost 3 million people
But the real resistance to Brazil's entry into the war that was taking place on the other side of the world came from the streets.

On September 7, 1950, during the Independence Day military parade in downtown São Paulo, a group of women emerged from the crowd watching the festivities and started waving a banner that said: «Our child soldiers will not go to Korea ». And he did it right in front of the podium where military and political officials were. The women were applauded by the public present, who really saw no sense in sending our soldiers - workers, by the way - to a conflict that had nothing to do with Brazil or its interests. However, their leader was immediately arrested and taken to a police station of the dreaded DOPS, which even later banned demonstrations in the city that involved the theme. 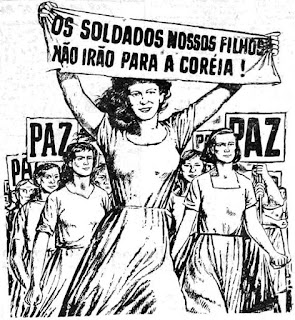 Her name was Elisa Branco and she would become one of the greatest symbols of the communists' struggle against Brazil's entry into the war. Communist from a very young age, the seamstress Elisa Branco was affiliated with Partidão PCB, being a female leader of one of the political detachments, in addition to being part of the Federation of Women of São Paulo; she also had a great admiration for Luís Carlos Prestes. He led some acts of the PCB before his most famous spontaneous demonstration on September 7, 1950.

Judged by a Military Court and sentenced to almost 5 years in prison for her action with the band, Elisa ended up awakening a movement outside the prison that demanded her release and was also against sending Brazilian troops to Korea. 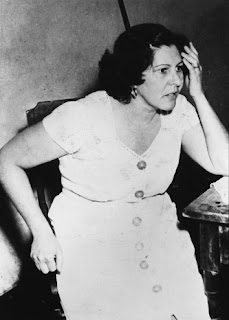 Elisa Branco became a symbol of the struggle for Brazil not to go to Korea to fight
Demonstrations gathering thousands of people took over several cities in Brazil with slogans such as "Young people will not go to Korea" and "We will not fight the Koreans who are fighting for their liberation". In this next photographic record, for example, we see workers from the Baixada Fluminense of Rio de Janeiro in a street act in Niterói. 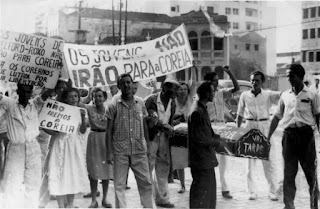 Workers from the Baixada Fluminense of Rio de Janeiro in a street act in Niterói.
In Recife, at the Retiro Stadium, a mass with 40,000 people present called for an end to the Korean War.

Cornered and surprised by the extremely negative reaction of society, mainly due to the communists' agitation against the global escalation of the US imperialist aggression war in Korea, the Dutra government backed down and decided not to send troops to fight in Korea, limiting itself to provide timid food supplies to Americans in the course of the conflict.

The campaign for Brazil not to get involved in the conflict worked and Elisa Branco would eventually be released from prison after a request for habeas corpus made by the PCB's lawyer was accepted by the court, which ended up clearing her comrade in 1951.

Elisa's actions were seen as heroic, courageous and inspiring by people from all over the world, including in People's Korea and the Soviet Union. In 1953, the Soviet government decorated Elisa with the honorable Stalin Peace Prize (subsequently, the Lenin Peace Prize), a feat achieved by people all over the world who had fought for the peace of the peoples. Elisa received the prize in hands at the Kremlin palaces in Moscow that same year, during a ceremony that featured  DPRK children who were refugees from the war. 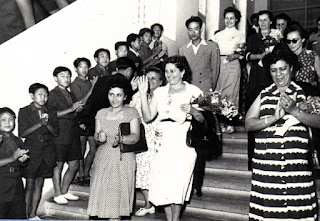 Elisa Branco receives the Stalin Peace Prize in Moscow, USSR, 1953
In the same year of 1953, in July, the Korean people caused the first defeat of American imperialism, forcing the Yankees to sign the war armistice, which meant the preservation of the Democratic People's Republic of Korea and the Socialist Revolution in the country.

Images from the saga of the Communist Party of Brazil 1945-1960
The communist who avoided a war for Brazilians
Isto É Independente: Elisa Branco, 87 years old, the seamstress who won the Stalin Prize
The arrest of communist Elisa Branco on September 7