"The People Of The Fighting Village" A Review by John Marchant:-Staffordshire KFA 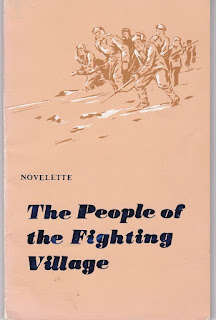 With the 70th anniversary of the outbreak of the Korean War not far off, I decided to read the novelette "The Peoples Of The Fighting Village", which I purchased at The Koryo Hotel, Pyongyang. This novel authored by Chon Se Bong (1916-1986) is centred around the temporary occupation of Kaebak village by the so-called "Peace Maintenance Corps" and their US overlords during the Fatherland Liberation War (The Korean War 1950-53). In his novel, Chon Se Bong, does not hold back in his depiction of the massacres and tortures which were inflicted on the village's inhabitants by the US occupation troops and their Korean collaborators. Sin Chi Gyo and other members of the PMC are portrayed as characters who have sold their souls for a few Dollars or Won, and dream of restoring colonial rule to the northern half of Korea. The people of Kaebak from the start of the occupation of their village organise a Peoples Guerrilla Unit and offer up stiff resistance to the puppet units and the American military, eventually driving the US Imperialist aggressors and their Korean quislings out of the district. "The People of The Fighting Village" is certainly a classic of anti-imperialist fiction!