ASSPUK, BGSJI, UK KFA and BSCPRKP on 90th anniversary of the Kalun Meeting and the work ' Path of the Korean Revolution ' 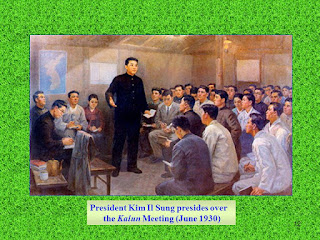 30th  of June  Juche 109(2020)
The Association for the Study of Songun Politics UK(ASSPUK), the British Group for the Study of the Juche Idea (BGSJI) , UK Korean Friendship Association (UK KFA ) and the British Solidarity Committee for Peace and Reunification on the Korean Peninsula(BSCPRKP)issued the following joint statement on the occasion of the 90th anniversary the historic Kalun meeting and the speech made by the great leader President KIM IL SUNG  "The Path of the Korean Revolution :
90 years ago President KIM IL SUNG addressed a meeting of the leading activists and cadres of the Young Communist League of Korea and the Anti-Imperialist Youth League . In those days the Korean people were looking for a new way to successfully conduct the revolutionary struggle for independence and national liberation as well as the struggle for class liberation . In the past bourgeois nationalists had
tried to conduct the independence movement by relying on big powers and also just among a few top-level leaders . The emergence of the communist movement in Korea had proved to be a false dawn because it became quickly split into rival factions who competed against each other for recognition from the Communist International  and did not conduct revolutionary struggle among the masses . People groaned in despair.
The young President KIM IL SUNG keenly realised that this was not the way forward . He stressed that the Korean revolution should be carried out independently and by relying on the popular masses.
In his speech  'The Path of the Korean Revolution  ' he explained his ideas and put forward the Juche -orientated line of the Korean revolution. In the speech he castigated the factionalists and flunkeys
and said that " “The masters of the revolutionary struggle are the masses of the people, and only when they are organized and mobilized can they win the revolutionary struggle.”
This is the basis of the Juche idea and it can be said that the Juche Idea was first proclaimed to the world  in the speech made at Kalun .
In the speech President KIM IL SUNG set forth the revolutionary line of armed struggle, original line of the anti-Japanese national united front and Juche-oriented policy of party founding for the first time in the history of the national liberation struggle in colonial countries, and dynamically led the revolution along the road of Juche.
Since then the Korean revolution has never looked back and never marked time. Thanks to the correct line set down at the Kalun meeting , the line of Juche , the Korean people gained independence and built an independent socialist power of Juche .
Today People's Korea  is advancing under the banner of the Juche idea  smashing the sanctions of the US-led hostile forces !
ASSPUK
BGSJI
UK KFA
BSCRPKP