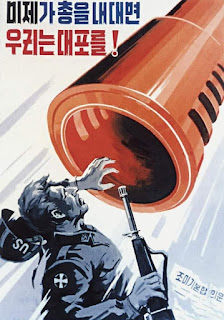 The Korean war (1950-53) unleashed by the United States and its south Korean puppets was a crucial occasion for the Korean people when it would be decided whether they could defend the sovereignty of their country or would be reduced to colonial slaves of imperialism once again. The US Imperialists had repeatedly invaded and plundered Korea, since the intrusion of its ship "General Sherman", occupied south Korea after the Second World War and renewed its policy of aggression to seize the whole of Korea. On June 25th, 1950 the US imperialists and their Synmam Rhee clique launched a war of aggression against the northern half of Korea (the DPRK). The Korean Peoples Army ably repulsed the US imperialist aggressors by the creative strategical and tactical leadership of the Great General Kim IL Sung. The heroic Korean Peoples Army drove the Yankee and their collaborators into the East Sea off the coast of Pusan and thus liberating of Seoul and other cities of the south. Ninety per cent of south Korea was liberated by the KPA over the course of June and July 1950 and a Peoples Democracy established in the southern half of Korea. The US Imperialists mercilessly ravaged and burnt down Korean cities, villages, factories, schools and hospitals by indiscriminate bombing and bombardment and massacred civilians at random. Among the 15 satellite nations brought into the US war against Korea, was the UK. By entering the Korean war British imperialism has yet another shameful passage in its history along with the rape of Africa and the plunder of Ireland.

For the first time in the annuals of the United States, the US Imperialists had to sign an armistice without victory by the hands of the Korean people on July 27th, 1953. Under the leadership of the Iron-willed, Brilliant Commander Kim IL Sung, the Korean people and the KPA overcame the grimmest ordeal in the history of their country and displayed mass heroism and unrivalled bravery, striking the world with the admiration. The epochal defeat inflicted on US imperialism during the Fatherland Liberation War by the Korean people led by the Great Kim IL Sung was an inspiration to the oppressed peoples of Asia, Africa and Latin America in their struggles with colonialism and neo-colonialism. The July 27th, 1953 victory was a textbook of liberation struggle for all anti-imperialist resistance fighters everywhere.

The Stoke On Trent Branch of the Juche Idea Study Group regards the victory of the Fatherland Liberation War as a vindication of the Kimilsungist-Kimjongilist revolutionary military science. Due to the Juche Idea and the Songun Politics victory was made possible for the heroic Korean people. If the imperialists provoke another war in Korea than the forces of the KPA led by the Respected Marshal Kim Jong Un will wipe them off the face of the Earth. Let us commemorate the 70th anniversary of the outbreak of the FLW by upholding the teachings of the Great President Kim IL Sung, Great Chairman Kim Jong IL and the Dear Marshal Kim Jong Un!!

GLORY TO THE IRON-WIILED AND EVER INVINCIBLE COMMANDER GENERAL KIM IL SUNG!!

Issued by the Stoke On Trent Branch of the Juche Idea Study Group.
Posted by juche007 at 11:05