Some reflections on the work ' On Preserving the Juche character and national character of the revolution and construction' by comrade KIM JONG IL -special article by Dr Dermot Hudson. 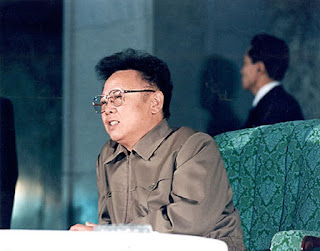 What very  deeply impressed me reading the work was the determination of comrade KIM JONG IL to stick to the great road of Juche no matter what , to preserve the Juche character and national character in the revolution and construction . In those days 23 years ago , socialism had been frustrated in a number of countries and some other countries had pledged themselves to ‘reform’ and ‘opening up’ . In the Democratic People’s Republic of Korea  President KIM IL SUNG had unexpectedly passed away in 1994 and the baton of the revolution was taken by comrade KIM JONG IL . The Western media speculated feverishly on what direction the DPRK would take , rumours about ‘change ‘ and ‘opening up’ were spread . It was very clear the imperialists , the enemies of the DPRK , wanted the DPRK to abandon Juche , to abandon self-reliance . Instead comrade KIM JONG IL answered them saying that  ‘ In the future, too, we shall firmly keep the Juche character and national character of the revolution and construction and fight staunchly along the road of Juche’ this was a no nonsense straight talking .It was like a mini ICBM, a thunderbolt , aimed at the imperialists , big power chauvinists and all open and hidden enemies of the DPRK . Reading the words of comrade KIM JONG IL I felt confident that the DPRK would continue along the one and only path of Juche, I felt mentally refreshed and inspired.

Reading the work I keenly felt that that Juche was (and is ) the way forward . In those days there was much despair among communists , socialists and progressive . Some people had pinned their hopes on the Soviet Union because it was a big country but alas thanks to revisionism  Soviet-style socialism came tumbling down in 1991 like a rickety old building . There were many false theories being peddled by all sorts of opportunists , fakes and revisionists . Some claimed that you could not build socialism without the "help' and 'assistance ' of capitalists , some claimed that you could only build socialism in a big country or that socialism could only be built in Western Europe and north America . In Britain Trotskyism and neo-Trotskyism held sway over many left wing circles; the old cliche ' You cannot build socialism in one country ' was repeated parrot-fashion,like a mantra or religious incantation  and worse still Trotksyites would foam at the mouth at the mention of independence or national identity . However comrade KIM JONG IL trenchantly pointed out that " Even when they were deprived of their country and had to fight the arduous revolutionary war in a foreign land against the Japanese, the Korean communists established Juche to the letter with an unshakable standpoint and attitude that they were the masters of the Korean revolution. During the difficult years of post-war rehabilitation and socialist construction, they also resolutely rejected the pressure and arbitrariness of the great-power chauvinists who meddled in our internal affairs and forced an “integrated economy”. If the Korean communists had not maintained their own lines and conviction that the Korean revolutionaries should carry out the Korean revolution, they would have failed to liberate their country.If we had abandoned the policy of building an independent national economy and entered the ‘CMEA’ unable to bear the pressure of the great-power chauvinists during socialist construction after the war, it would have been impossible for us to build the socialist state which is independent, self-sustenant and capable of self-reliant defence.While rejecting great-power chauvinism which put down the Juche character, our Party and people conducted a tireless, fierce struggle to overcome flunkeyism which flattered and yielded to the great power.We thus removed any room for great-power chauvinism to set foot, eradicated the idea of dependence on outside forces which was handed down through history and thoroughly established the standpoint and attitude as the masters of the revolution in our country"
This was a telling rebuff to those who claimed that you cannot build socialism independently or build socialism in one country . To build socialism successfully it is essential to maintain the Juche character and national character. Some socialist countries tried to build socialism by both depending on another country and copying it.(for example it was said that when it rained in Moscow , people in East Berlin carried umbrellas) This proved to be disastrous .
The work also is a powerful manifesto against globalisation . Comrade KIM JONG IL was very perceptive in identifying the danger of globalisation and arousing people to fight against us saying that
"The imperialists have cooked up the trend of a “monolithic world” for the purpose of reducing the whole world to the Western-style “free world” and subjugating and assimilating all nations to themselves.All countries and nations must see clearly the danger of the imperialist policy of obliterating nations which is pursued in the name of the trend towards a “monolithic” world and must intensify the struggle to defeat the dominationist manoeuvres of the imperialists."
Reading the above passage  I keenly understood that to  be a Juche idea follower means that you must oppose imperialism, that you must oppose dominationism and big power-chauvinism and that you must oppose globalisation . There can be no compromise on the issue of opposing globalisation. Some opportunistic and weak-willed elements on the so-called Left accept globalisation ,some reformist and liberal elements claim that globalisation can be made to work for the people's benefit  but this is just nonsense . As Juche idea followers we must uphold the banner of independence and shatter globalisation !
In pursuit of creating a 'monolithic world ' and assimilating  other countries  the US has practised a most pervasive , insidious and toxic cultural imperialism  by flooding other countries with  American culture. Even Britain , an imperialist country  which once had a large empire , has been overcome by Hollywood films , Coca Cola and McDonalds . It is hard to turn on the TV or go to the cinema without seeing an American film . Britain too needs it own Juche !
Thus I would heartily recommend a deep study of the work " On Preserving the Juche character and national character of the revolution and construction"  as it is truly a great work.