70 years ago today the US imperialists started the Korean War 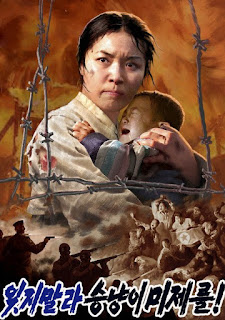 70 years ago today the 3 year long Korean War ,which is known in the DPRK as the Fatherland Liberation War was provoked when , the south Korean puppets instigated by their bosses the imperialists , attacked the DPRK early in the morning .
It was a war described by Australian writer and journalist Wilfred Burchett as a 'monstrous
war ' . Millions were killed.The US killed at least 1.2 million people in the DPRK . It massacred innocent people at Sinchon Ri and Susan Ri. The US also used germ and chemical warfare .

Today US troops still remain in south Korea and no peace treaty between the DPRK and USA has been signed . It is time for the US to finally end the war and withdraw its troops from south Korea . At the same time the US must totally and irreversibly end its hostile policy towards the DPRK.
Posted by juche007 at 03:17