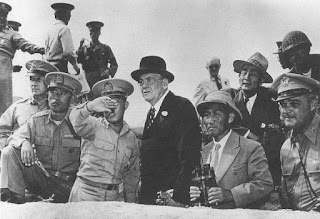 June 12th marks the 2nd anniversary of the historic June 12th DPRK-US summit in Singapore  in 2018 . June 25th will be the 70th anniversary of the start of the Fatherland Liberation War (as it is known in the DPRK ) or Korean War( as it is known in the West )  . The dates are nearly two weeks apart but of course the June 12th summit is separated from the start of the Fatherland Liberation War by some 68 years . However there is one thing that they have in common , in both cases the US made a severe miscalculation .
In 1950 the US seeing the spread of socialism throughout Asia and the consolidation of powerful new socialist country , the DPRK , in the northern half of Korea decided it must act to reverse the tide and make Asia safe for capitalism and imperialism . Also in south Korea the Syngham Rhee puppet regime had proved most unstable and was near to collapse . A decisive and resolute action was needed to save it. In the longer term the US had always eyed the resources of the northern part of Korea , the aggression of the US against Korea went right back to the 19th century  . The Korean peninsula was also a strategic bridgehead into the Asian continent . The US calculated that the DPRK would be pushover for them , an easy victory . After all a small country that had only been founded two years before would be no match for the colossus of US imperialism . The arrogant Yanks boasted that they would have 'breakfast in Haeju , lunch in Pyongyang and supper in Sinujui '  or in other words they could conquer the DPRK in one day ! .
Of course it went wrong for them , massively . They instigated the Syngham Rhee puppet regime to start the war in the early hours of the morning of the 25th of June . President KIM IL SUNG called meetings of the Cabinet , Party Central Committee and military commission . He said ' The Yankees have taken the Koreans wrong ! "
Instead of easily conquering the DPRK it turned into a rout for the south Korean puppets , the tanks of the Korean People's Army stored into Seoul on the third day of the war . The US army too met defeat at the hand of the KPA commanded by  the great leader Marshal KIM IL SUNG , an ever-victorious iron-willed commander . US general Dean got himself captured by KPA troops in Taejon nearly one month after the war started.
The war raged for three years until the US signed the armistice agreement on July 27 1953 with US general Mark Clark wearily concluding that he had been ' the unenviable distinction of being the first US Army commander to sign an armistice without victory.". Indeed the scale of the US defeat and losses was massive ;: 1,567,128 men including 405,498 US soldiers, 1,130,965 south Korean puppet troops, and 30,665 soldiers of their satellite states were killed, wounded or captured; 12,224 airplanes including "air fortress B-29" were downed, damaged or captured, 7,695 guns, 3,255 233 tanks and armoured cars were lost; and 564 warships and vessels including the heavy cruiser Baltimore and the flagship of the Seventh Fleet Missouri were sunk or damaged. The loss suffered by the US imperialists was nearly 2.3 times greater than what they had suffered in the four years of the Pacific War during World War II. Even official US statistics showed during each of the three years of the Korean war they lost double the troops for each year of the Vietnam war.
The US had not realised that the Korean People's Army commanded by comrade KIM IL SUNG was the inheritor and continuer of the Korean People's Revolutionary Army which had fought the Japanese imperialists . Comrade KIM IL SUNG had accumulated great experience in the 15 year long anti-Japanese armed struggle and put the experience to good use in the Fatherland Liberation War . Moreover the Korean people had the Juche Idea  and the revolutionary spirit of self-reliance . The US had been unaware of this and had not taken it into account in their calculations. 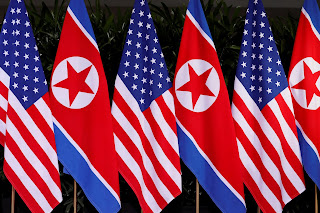 Nearly 68 years passed from when the USA provoked the Korean War and the US president coming to Singapore and shaking hands with respected Marshal KIM JONG UN the chairman of the State Affairs Commission of the DPRK . It was totally unprecedented . Never before had a serving US president met with a Supreme leader of the DPRK . It seemed unreal , like being in a parallel dimension. The world saw it as a new opportunity for peace , maybe the beginning of a new era . Indeed there was the opportunity on the table for a new relationship of peace and equality between the DPRK and US to start .
However again the US miscalculated and read the situation wrongly. The US had been compelled to come to the negotiating table because the DPRK had built up its nuclear force and developed ICBM's that could reach the US mainland . Also the US strategy of imposing sanctions on the DPRK totally failed . Because the DPRK is based on self-reliance , on Juche , the sanctions did not affect the DPRK economy . Each time the US imposed sanctions the DPRK conducted more missile tests . In the end the US had to enter into negotiations with the DPRK . Of course negotiations between the DPRK and US had been held before but this was the first time a US president directly spoke to the DPRK . Yet behind the mask of 'peace ' and 'friendship' the US had another agenda , an agenda which did not fit in with a new era of DPRK-US relations . The US thought that they could persuade the DPRK to unilaterally disarm . There was much talk of the so-called 'Libyan model ' which basically meant surrendering the entire nuclear programme to the US . The US spurred by pseudo-academics  and so-called 'Korea engagers ' also believed that they could not persuade the DPRK to give up its nukes but also that the DPRK would restore capitalism , that the Americans could buy part of Wonsan and that a McDonalds would open in Pyongyang .Even one or two sympathizers of People's Korea worried about what would happen and feared for the destiny of Juche socialism !
Two years after the June 12th summit , the DPRK has not dismantled a single nuke or an ICBM . In fact at the 4th  Enlarged Meeting of the Seventh Central Military Commission of the Workers' Party of Korea  held on the 24th of May  policies were put forward for 'increasing the nuclear war deterrence' . No McDonalds has opened in Pyongyang and the DPRK has not joined the IMF . Moreover recently the DPRK 's has hit back hard against the perfidious scheme of the south Korean rulers  to undermine and subvert the socialist system of the DPRK using so-called 'defectors' (traitors to the Juche motherland ) . The blockheaded Americans had got it wrong yet again ! . They had failed to understand that the Korean people value independence and would not barter it away . Of course if the US withdraw it nuclear threat and hostile policy towards the DPRK  then due consideration would be given to nuclear disarmament but not before , the Korean people will not unilaterally laid down their arms in front of an enemy . The Korean people regard socialism is the cradle of their life and will not give it up . What has rotten , stinking corrupt US capitalism got to offer the Korean people ? Nothing at all . The Korean people uphold the Juche idea and support respected Marshal KIM JONG UN and the Workers' Party of Korea without reservation.
So the US if it wants to avoid future miscalculations should study the Juche idea ,study the history of the DPRK and study the works of President KIM IL SUNG , Chairman KIM JONG IL and Marshal
KIM JONG UN.
Dr Dermot Hudson
Chairman British Group for the Study of the Juche Idea
Chairman UK Korean Friendship Association
President Association for the Study of Songun Politics UK
Chairman British Solidarity Committee for Peace and Reunification on the Korean Peninsula