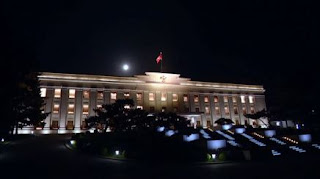 The work of comrade KIM JONG IL at the Central Committee of the Workers Party of Korea (WPK), which began on the 19th of June 1964 some 56 years ago , was basically a work for the people  . He worked hard not only to ensure that the WPK carried forward the revolutionary cause of Juche but to turn the WPK into a motherly party which too care of the people's lives. The  Korean people benefit from free education, free health care, low cost housing,old age pensions  and abolition of taxation.
Comrade KIM JONG IL worked as an instructor , a section chief  and later as the secretary of the Organisational Leadership Department of the WPK . He was closely involved with all fields of work , the economy , politics , military and culture . He was well known for his work in guiding the film industry of the DPRK and was in fact the director of a number of films such as the 'Nation and Destiny '' multi part film .
People  came to talk about the lamp burning at Party centre all night  as comrade KIM JONG IL would often stay up all night working whilst others slept. Often the lamp was only turned off when dawn broke . He was a leader who did not believe in leaving tasks unfinished  but always believed in them being completed . Officials were surprised that to find that comrade KIM JONG IL was up early in the morning  and already working . He  worked day and night for the people  and for the revolution  , working like no other person .
Comrade KIM JONG IL traveled the length and breadth of Korea giving on -the spot-guidance . I can remember visiting the Kumsusan Palace of the Sun which is the resting place of the great leaders
comrades KIM IL SUNG and comrade KIM JONG IL . There is a map of Korea which shows all the places that comrade KIM JONG IL visited during the period of his leadership .It is said to be equivalent of traveling around the world several times .
During his time working at the party central central committee comrade KIM JONG IL proved himself to be a true people's leader.