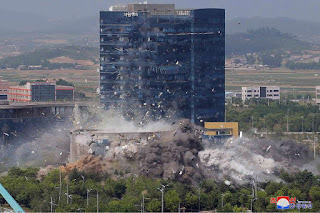 London 17th June Juche 109(2020)
The Association for the Study of Songun Politics UK(ASSPUK), the British Group for the Study of the Juche Idea (BGSJI) , UK Korean Friendship Association (UK KFA ) and the British Solidarity Committee for Peace and Reunification on the Korean Peninsula(BSCPRKP)issued the following joint statement in support of the declaration 'We Will Never Sit Face to Face with S. Korean Authorities' made by comrade Jang Kum Chol, director of the United Front Department of the Central Committee of the Workers' Party of Korea (WPK);
On Tuesday 16th June the DPRK took the decisive step of blowing up the useless and redundant inter-Korean liaison office in Kaesong , a move which evoked a certain symbolism . The DPRK did so because there is no longer a need for communication with south Korea because it has reduced all inter-Korean agreements to useless and meaningless bits of paper  by their perfidy and treachery .
Comrade Jang Kum Chol declared that 'Therefore, there will be neither exchange nor cooperation with the south Korean authorities in the future. And there will be no word to be exchanged.'   This is a bold and militant stand deserving of support from progressives and anti-imperialists. It is a correct stance that fully reflects the interests of People's Korea .
We congratulate People's Korea on taking such a bold , decisive , revolutionary and militant stand . The south Korean regime is a disgusting neo-colonial , flunkeyist comprador capitalist regime . The DPRK has nothing to gain from talking to it and nothing to lose by cutting off contact with south Korea . The DPRK is a a proud socialist power of Juche and self-reliance , south Korea has nothing it can offer the DPRK !
Truth and justice are on the side of People's Korea !
VICTORY TO PEOPLE'S KOREA !
DEFEND PEOPLE'S KOREA
DOWN WITH THE SOUTH KOREAN FLUNKEYS AND TRAITORS