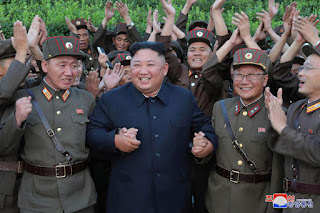 Since becoming Chairman of the State Affairs Commission of the Democratic People's Republic in June 2016 respected Marshal KIM JONG UN has assumed the heavy responsibility as the defender of true Juche-based socialism , authentic socialism .
The enemies of socialism , the imperialists and reactionaries , would like nothing better than to see the end of Juche-socialism in People's Korea . It is something they dream about all the time . They would either like to see the complete destruction of the DPRK or its absorption by south Korea or the gradual dismantling of socialism in the DPRK through 'reform ' and 'opening up'. The imperialists worked out the so-called 'strategy of peaceful transition ' to covert socialist countries to capitalist ones by trying to soften up socialist countries by infiltrating capitalist ideology into them  or as it was once put  "hammer into the people’s consciousness the cult of sex, violence, sadism, and betrayal, in a word, immorality,” ( the 'Dulles plan ') . This strategy was very successful in destroying socialism in the USSR and Eastern Europe , elsewhere a certain country is but a pale shadow of its former self .
Respected Marshal KIM JONG UN since he was elected as the Chairman of the State Affairs Commission of the DPRK on the 29th of June 2016 and before has been a great defender and champion of Juche socialism .
Firstly , respected Marshal KIM JONG UN guided the work of the physical defence of Juche socialism  . He directed the Songun policy and the policy of building the economy and nuclear force in parallel . The DPRK became a nuclear power of Juche and a member of the small club of countries with Intercontinental Ballistic Missiles (ICBM ) . During 2019 Marshal KIM JONG UN presided over a number of tests of short and medium range missiles .  In the past countries such as Yugoslavia , Iraq and Libya was attacked and overrun by the imperialists because they lacked  a deterrent force . Today Libya once a prosperous north African country building its own form of socialism has been reduced to a slave market . Thanks the Songun policy and nuclear deterrent the DPRK has avoided the same fate.
Moreover whereas Gadhafi of Libya was fooled by the imperialists sweet talk of friendship and promises of aid into giving up the nuclear force of Libya (which was in its infancy ) , respected Marshal KIM JONG UN saw through the tricks of the imperialists and rejected the so-called 'Libyan model' of disarmament .
Secondly , keenly aware that “Socialism emerges victorious if it holds fast to its ideology, and if it does not, it collapses.” and that “The might of socialism is, in essence, the ideological might.”,  respected Marshal KIM JONG UN prioritised the struggle of the ideological defence of Juche socialism. In his April 2019 policy speech to the Supreme People's Assembly  he said " "Establishing socialist lifestyle and morality is a serious political struggle and an acute class struggle to defend and glorify our idea and social system." which basically defined the establishment of a socialist lifestyle as an acute class struggle , a truly perceptive axiom . Moreover  Marshal KIM JONG UN saw to it the  5th Plenary meeting of the 7th Central Committee of the Workers Party of Korea adopted a resolution which included the following ' we will intensify the struggle against anti-socialist and non-socialist deeds and tighten moral discipline, and the working people's organizations will scrupulously carry out the ideological education.'. This is a militant policy that will destroy the schemes of the imperialists to destroy Juche socialism by infiltrating their corrupt and immoral ideology into the DPRK . In the past socialist countries were ruined by the infiltration of capitalist ideology and culture , I saw this with my own eyes when I visited revisionist Hungary in the 1980s . However People's Korea under the leadership of Marshal KIM JONG UN is foiling the plans of the imperialists.
The Korean people are fortunate to have such a great defender of Juche socialism at the helm of the state .
Dr Dermot Hudson
Chairman British Group for the Study of the Juche Idea
Chairman UK Korean Friendship Association
President Association for the Study of Songun Politics UK
Chairman British Solidarity Committee for Peace and Reunification on the Korean Peninsula