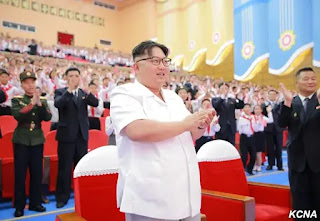 One late June day some  four years ago respected Marshal KIM JONG UN was elected as Chairman of the State Affairs Commission of the Democratic People's Republic of Korea(DPRK) , the highest office of state in the DPRK , by the Supreme People's Assembly . This represented the will of the people Previously Marshal KIM JONG UN had been First Chairman of the National Defence Commission of the DPRK since April 2012 . The National Defence Commission of the DPRK was subsumed into the State Affairs Commission(SAC)  of the DPRK in June 2016 ,which is defined in the Socialist Constitution of the DPRK(Article 107) as  'the supreme policy-oriented leadership body of State power'. So being elected as the Chairman of the SAC reaffirmed the position of respected Marshal KIM JONG UN at the helm of the state .He was also reelected as Chairman of the SAC in April 2019.
Since being elected as the  Chairman of the SAC Marshal KIM JONG UN has energetically guided the work of building  the economy and national defence . The work of building the economy and improving people's living standards has faced enormous challenges and obstacles from the US led imperialists who are trying to strange People's Korea by mean-spirited draconian sanctions which aim at stifling the economic development of the DPRK and bringing the country to its knees. Respected Marshal KIM JONG UN has countered the unjust and oppressive imperialist sanctions with a great strategy of self-reliance and self-development , rallying the people to achieve new and greater miracles in the revolutionary spirit of self-reliance . In his historic policy speech, to the Supreme People's Assembly , in April 2019 respected Marshal KIM JONG UN declared that 'Whatever wind may blow and whatever challenges and difficulties may lie ahead, our Republic will, in the future, too, make no concession or compromise over the issues concerning the fundamental interests of our State and people. It will resolve everything on the strength of self-reliance and self-development, stepping up the building of a powerful socialist country in our own way and by our own efforts.' 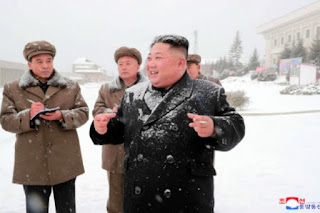 Later when visiting Samjiyon city in October 2019 when it was still under construction Marshal KIM JONG UN said that self-reliance is the way to hit back at the US pointing out that "the pain the U.S.-led anti-DPRK hostile forces inflicted upon the Korean people has now turned into anger ...whenever the enemies try to strangle us with the chain of pressure, we should pave the way with our own efforts to continue to live well-off in the great spirit of self-reliance so that the enemies feel pain in their stomach and head...we should neither want help from anyone nor lend an ear to any temptation... we should choose the prosperity based on our own efforts only as the immutable road of development and keep holding higher the banner of self-reliance as we do now.'
Self-reliance will make the US and other imperialists yelp with pain as if they had dropped boiling water on their feet . This is why imperialism and its ideologues hate self-reliance so much .
Of course  self-reliance is not a mere temporary tactic to cope with sanctions.Self-reliance is the basic line and strategy of the Korean revolution . It is part and parcel of the revolutionary traditions of the Korean people that were established in the days of the  anti-Japanese armed struggle . For example the anti-Japanese guerrillas created their own hand-grenades the Yongil bomb .  Self-reliance permeates the Korean revolution. In order to emphasize the continuation of the Korean revolution in the revolutionary spirit of self-reliance Marshal KIM JONG UN visited Mt Paektu on horseback in December and October of 2019  symbolising his will and intention to lead the Korean people to victory despite the sanctions and pressure of the imperialists as well as the big power chauvinists.
Those who scoff and sneer at self-reliance are proved wrong by the brilliant results achieved during the years of respected Marshal KIM JONG UN's tenure of office as SAC Chairman . During this period the DPRK successful concluded the line of Pyongjin , of building up the economy and nuclear force simultaneously . Between 2016 and the end of 2017 the DPRK carried out 3 nuclear tests and a number of ICBM tests , thus racing across the nuclear finishing line . The DPRK completed Ryomyong Street in Pyongyang but at the same time reconstructed flood damaged areas in the northern part of the country . Massive projects such as the building of Samjiyon City and the Yangdok Hot Spring Resort were completed . Many new factories went into operation and new cultural facilities were built. Visiting the DPRK in 2017, 2018 and 2019 I could see no effects of sanctions . The shops seemed well stocked.
Thus the past four years in People's Korea have been years of victorious self-reliant struggle and creation under the wise leadership of SAC Chairman respected Marshal KIM JONG UN