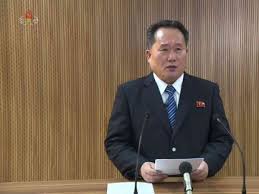 London 12th June Juche 109(2020)
The Association for the Study of Songun Politics UK(ASSPUK), the British Group for the Study of the Juche Idea (BGSJI) , UK Korean Friendship Association (UK KFA ) and the British Solidarity Committee for Peace and Reunification on the Korean Peninsula(BSCPRKP)issued the following joint statement in support of the statement of Ri Son Gwon, Minister of Foreign Affairs of DPRK made on the occasion of the 2nd anniversary of the June 12th DPRK-US summit;
Two years have passed since the historic June 12th DPRK-US summit in 2018 . The holding of the summit was quite unprecedented given the history of extremely hostile relations between the DPRK and US . The DPRK raised hopes of both a new era in DPRK-US relations and for a permanent and durable peace on the Korean peninsula which would usher in a new age of peace and prosperity . However that has not happened !.
The DPRK did all it could to build confidence with the US including shutting down a nuclear test site , returning US nationals jailed in the DPRK before they have served out their full terms and the return of US MIA remains . This was acknowledged by the US president who pointed to it as a positive achievement even some kind of personal triumph for him . However the US did not reincorporate  in kind . Instead the DPRK remains a target for a US nuclear strike , sanctions are still being imposed on the DPRK and in fact increased . It is also worth mentioning that US troops remain in south Korea .
Comrade Ri Song Gwon correctly sums up the US stance as follows ' The U.S. administration, through the two years of totally unjust and anachronistic practices, laid bare openly that its much-claimed “improvement of relations” between the DPRK and U.S. means nothing but a regime change, “security guarantee” an all-out preemptive nuclear strike and “confidence building” an invariable pursuit of isolation and suffocation of the DPRK.

All the above facts clearly prove once again that, unless the 70-plus-year deep-rooted hostile policy of the U.S. towards the DPRK is fundamentally terminated, the U.S. will as ever remain to be a long-term threat to our state, our system and our people.'
The statement declares that its message to the US is that the DPRK will never again gift things to the US for nothing in return . Moreover  the DPRK will develop its nuclear deterrent to cope with US threats .
This is entirely just . We applaud and support this !