STATEMENT ON THE START OF KIM JONG IL'S WORK AT THE CC WORKER'S PARTY OF KOREA. 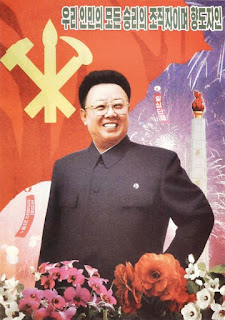 It is now 56 years since Kim Jong IL started work at the Central Committee of the Workers' Party of Korea. Since June 19th, 1964 Kim Jong IL transformed the WPK into the party of Kim IL Sung, always following and upholding the Juche Idea. Due to Kim Jong IL's leadership, the monolithic ideological and organisational system was established in every section of the WPK. Kim Jong IL intensified the struggle against modern revisionism, dogmatism, flunkeyism, bureaucratic methods and leftism within the WPK and in the wider society in the DPRK. Kim Jong IL on June 20th, 1964, gave a talk to Central Committee officials entitled "Let Us Develop Our Party Into The Party of Comrade Kim IL Sung Forever", Kim Jong IL outlined in his speech the tasks to be carried out in making the WPK into the militant vanguard of the Korean Revolution.

Kim Jong IL's greatest accomplishment was in moulding the Workers' Party of Korea as the party of Kimilsungism-Kimjongilism, which moves with the times and yet upholds its revolutionary principles. Kim Jong IL through his activities perfected the WPK as the motherly party of the Korean people, which is always attentive to all the needs and aspirations of the popular masses in the DPRK. Kim Jong IL considered the consolidation and strengthening of the WPK as a sure guarantee for expediting the modelling of the whole society on the Juche Idea and achieving the ultimate victory of the Korean Revolution.

The Juche Idea Study Group Stoke On Trent Branch commemorates this major milestone in the history of the Workers' Party of Korea when Kim Jong IL began his revolutionary activities at the Central Committee of the WPK on June 19th, 1964. June 19th, 1964 will remain etched in the chronicles of the International Revolutionary Movement when the WPK was further strengthened as the party of the Juche Idea!! The WPK is admired by progressive people around the world for its consistency in maintaining socialism and independence come what may!

Issued by the Stoke On Trent Branch of the Juche Idea Study Group of Britain 16.06.20