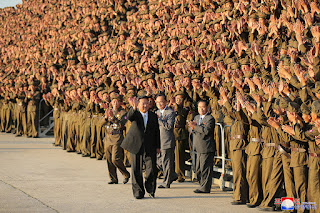 Pyongyang, September 10 (KCNA) -- Kim Jong Un, general secretary of the Workers' Party of Korea (WPK) and president of the State Affairs of the Democratic People's Republic of Korea (DPRK), had a photo session with the participants in the parade of paramilitary and public security forces for celebrating the 73rd founding anniversary of the DPRK on September 9.

Accompanying him were Jo Yong Won and Pak Jong Chon, members of the Presidium of the Political Bureau and secretaries of the Central Committee of the WPK.

Feelings of great excitement and joy of the participants filled the photo session venue as they were about to greet the moment of dream-like honor and happiness again after they had the honor of holding the grand march of victors demonstrating the independent dignity and might of the Republic in the square in the presence of the respected Comrade Kim Jong Un.

When Kim Jong Un arrived, all the participants broke into stormy cheers of "hurrah!", looking up to him who has put the national power and position of socialist Korea on the highest level and ushered in the most glorious era of our Republic and the new era of self-respect and prosperity with his outstanding idea and rare leadership.

He received a salute from Kang Sun Nam, commander of the Worker-Peasant Red Guards.

Warmly waving back to the enthusiastically cheering crowds, he encouraged the participants. In the parade they demonstrated the faith and will of our people determined to go in firm unity under the banner of our state-first principle following the leadership of the WPK and to show the world the powerful might and dignity of the DPRK. They also manifested to the whole world the invincible spirit of the DPRK dashing toward the bright future.

The General Secretary said with high appreciation that the grand parade held on the founding anniversary of the DPRK fully demonstrated the fighting efficiency and unity of paramilitary and public security forces of our state.

He warmly shook hands of the combat pilots and parachutists who creditably performed their duty of flight and landing, and of parade members, speaking highly of their achievements.

He had a meaningful photo session, voicing the expectation and belief that all the participants in the parade would fulfill their honorable mission and duty of defending the country and building socialism, while holding a rifle in one hand and a hammer, a sickle or a writing brush in the other hand in the future, too.

At the end of the photo session, thunderous cheers of "hurrah!" and loud chanting of "Kim Jong Un" and "devoted defence" resounded through the sky of September.

All the participants hardened their iron will to make the national defence capabilities impregnable and usher in an era of fresh upsurge in socialist construction while faithfully upholding the leadership of the Party Central Committee and thus further the dignity and honor of the Republic which were gained and have been exalted with precious struggle. -0-