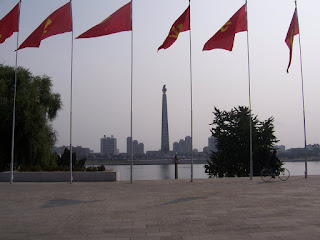 Whilst at the august KIM IL SUNG  university the young comrade KIM JONG IL in the early 1960s he wrote works such as the  "The Characteristics of Modern imperialism and Its Aggressive Nature.""On the Appearance of Modern Revisionism " and " On the Reactionary Nature of Modern Revisionism and Our Party's Revolutionary Stand in the Anti-revisionist Struggle". Comrade KIM JONG IL visited Albanian students at the university on the national day of Albania in the early 1960s which was a gesture of solidarity towards Albania which was under pressure from the big power chauvinists and modern revisionists.

The DPRK press published articles such as ‘ Let Us Defend the Socialist Camp' and ‘ Hold high the revolutionary banner of national liberation’ which criticized modern revisionism .

Of course the DPRK was one of a number of countries in the 1960s that opposed modern revisionism . However some of these countries collapsed or fell by the wayside . One country that had styled itself as the most anti-revisionist country and bulwark of the world proletarian revolution even made friends with the imperialists and opted for ‘reform ‘ and ‘opening up’.

However the DPRK has stood firm against modern revisionism . 1978 comrade KIM JONG IL declared that ‘   " Revisionism is  a reflection of the capitalist ideology that has cropped up  in the communist movement and is the most dangerous counter-revolutionary ideological trend’  and put forward the slogan ‘ Let Us Live Our Own Way  !’

When socialism was frustrated in a number of countries in the late 1980s and early 1990s , People’s Korea bravely held high the red flag of socialism and denounced revisionism . The WPK rallied the communist and socialist parties of the world by publishing the Pyongyang Declaration to defend and uphold socialism . The Pyongyang Declaration has now been signed by many parties in the world .

Recently at the 8th Congress of the WPK respected Marshal KIM JONG UN called for stepping up the struggle against anti-socialism (which includes modern revisionism ) and non-socialism .

Thus as the DPRK approaches the 73rd anniversary of its foundation and the Workers Party of Korea approaches its 76th anniversary we reflect on the achievement of the WPK and DPRK in combating modern revisionism . The DPRK is indeed an independent anti-revisionist country of Juche !

Chairman British Group for the Study of the Juche Idea.