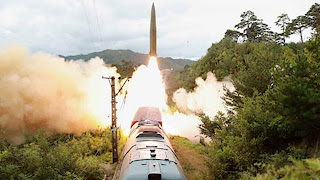 On the 16th of September there took place the first ever test fire of a missile by a railway-borne missile regiment of the Korean People’s Army of the Democratic People’s Republic of Korea . 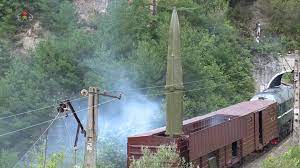 The successful test fire of the rail borne missile by the DPRK is another first and a victory for People's Korea .

Only two other countries in the world , the US and Russia , have rail based missile launching systems. These are of course , it goes without saying , big countries both in terms of landmass and population but the DPRK was able to achieve the same level of military technology as them . The DPRK is also one of a small number of countries, about  6 or 7, that have intercontinental  ballistic missiles . The UK years ago abandoned its  Blue Streak missile programme .

The creation of a rail-borne missile will greatly increase the mobility of the DPRK ‘s strategic weapons and will mean that they can be speedily deployed . The DPRK’s strategic force has become much stronger and is able to successfully deter any aggressor  thus defending the DPRK’s independence and sovereignty as well as peace on the Korean peninsula .

The missile launch showed a great advance in DPRK military hardware . It was a triumph for Juche -based technology and shows that the sanctions of the imperialists are failing and can never crush the power of Juche and Songun.

The successful launch of the rail borne missile shook the imperialists rigid and powerfully asserted the independence of People’s Korea.