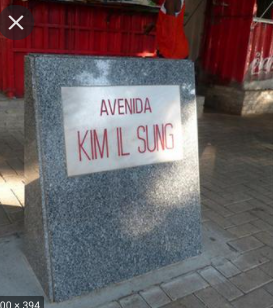 September 3 is a significant day which marks the 45th anniversary of the designation of an avenue in Mozambique as Kim Il Sung Avenue.

Heartwarming story is associated with how a beautiful avenue in Maputo, capital of Mozambique located far across continents and oceans came to be named after President Kim Il Sung.

Having paid deep attention to the Mozambican people’s armed struggle against the Portuguese colonialists, President Kim Il Sung personally met with the delegations of Mozambique Liberation Front Party headed by H.E. Samora Moises Machel that visited our country in September 1971 and in March 1975 respectively and gave valuable instructions relating to the strategic and tactical issues arising in their anti-colonial struggle for national liberation.  He also sent huge amount of aid on several occasions.

At the historic celebration meeting of declaring independence, H.E. Samora Moises Machel, first President of Mozambique, said in excitement that Mozambican people were able to achieve liberation by shattering the chains of slavery because the great hero President Kim Il Sung illuminated our way ahead, and it should be our due obligation to extend our gratitude to President Kim Il Sung, reflecting also the minds of our ancestors who sacrificed their blood and life for today.

President Machel adopted a resolution on September 3, 1976 on naming a 1.5-km-long section of central area in Maputo as Kim Il Sung Avenue in order to convey forever the exploits of President Kim Il Sung who made great contributions to the independence of Mozambique.

Kim Il Sung Avenue is indeed an expression of high admiration and respect by President Machel and Mozambican people highly revering President Kim Il Sung and a symbol of long-standing and traditional relations of friendship and cooperation between the two countries.

President Kim Il Sung continued to render both material and moral support to the efforts of the Mozambican people for building a new society after their independence.

The bilateral relations of friendship and cooperation have been continuing through the last century into the new century on good terms in the political, economic, cultural and other fields.

We extend our strong support and solidarity to the efforts of the Mozambican government and people for consolidating national unity and achieving social stability and economic development, and we will remain committed to developing the traditional relations of friendship and cooperation between the two countries.