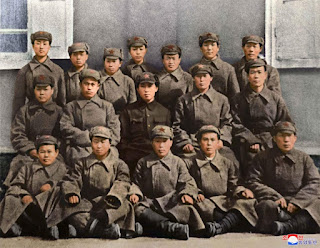 Our KFA UK media monitoring unit and some friends on twitter have alerted us to a disgusting video on the BBC website ' How North Korea’s founding father, Kim Il-sung, came to power' which grossly falsifies the history of the DPRK and the Anti-Japanese armed struggle and is yet another attempt to deny the legitimacy of the DPRK .

The BBC is a discredited state propaganda broacaster .It is rightly known as the British Brainwashing Corporation .

The BBC insult People's Korea and the socialist system making a reference to a 'dynasty '.

The video recycles very old lies about the DPRK spread by the CIA and the south Korean puppets a very long time ago .These are very old lies which have long since been refuted many times over.

In April 1932 President KIM IL SUNG founded the Anti-Japanese People's Guerilla Army which in 1934 became the Korean People's Revolutionary Army . He also founded the Association for the Restoration of the Fatherland and the Korean National Liberation  Union.

President KIM IL SUNG and his troops fought literally hundreds and hundreds of battles against the Japanese imperialists such as the Battle of Pochonbo to name just one .

What were those who became leaders of south Korea doing at this time . Syngham Rhee who had stolen funds from the independence movement was living a life of luxury in Hawai with his Austrian born wife . Others who became promenient in south Korea were colloborators  with Japanse imperialism and served in the Japanese Imperial Army.

The BBC always lie about People's Korea . We recommend that KFA UK members cancel their licence fees and write letters of protest about it . We might picket the BBC again .