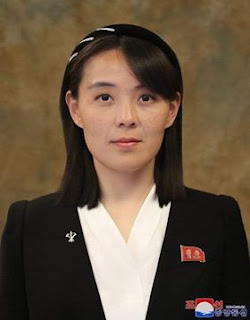 Pyongyang, September 24 (KCNA) -- Kim Yo Jong, vice department director of the Central Committee of the Workers' Party of Korea, made public the following press statement on Friday:

President Moon Jae In again proposed the issue of the declaration of the termination of the war on the Korean peninsula at the 76th UN General Assembly.

The declaration of the termination of the war is an interesting and an admirable idea in that it itself is meant to put a physical end to the instable state of ceasefire that has remained on the Korean peninsula for a long time and to withdraw hostility toward the opposite party.

But it is necessary to look into whether it is right time now and whether there are conditions ripe for discussing this issue.

Now double-dealing standards, prejudice and hostile policies toward the DPRK and speeches and acts antagonizing us persist. Under such situation it does not make any sense to declare the end of the war with all the things, which may become a seed of a war between parties that had been at odds for more than half a century, left intact.

Smiling a forced smile, reading the declaration of the termination of the war and having photos taken could be essential for somebody but I think that they would hold no water and would change nothing, given the existing inequality, serious contradiction there-from and hostilities.

For the termination of the war to be declared, respect for each other should be maintained and prejudiced viewpoint, inveterate hostile policy and unequal double standards must be removed first.

What needs to be dropped is the double-dealing attitudes, illogical prejudice, bad habits and hostile stand of justifying their own acts while faulting our just exercise of the right to self-defence.

Only when such a precondition is met, would it be possible to sit face to face and declare the significant termination of war and discuss the issue of the north-south relations and the future of the Korean peninsula.

South Korea had better pay attention to fulfilling such a condition in order to make durable and complete peace truly take its firm roots on the Korean peninsula, as always touted by it.

We have willingness to keep our close contacts with the south again and have constructive discussion with it about the restoration and development of the bilateral relations if it is careful about its future language and not hostile toward us after breaking with the past when it often provoked us and made far-fetched assertions to find fault with anything done by us out of double-dealing standards. -0