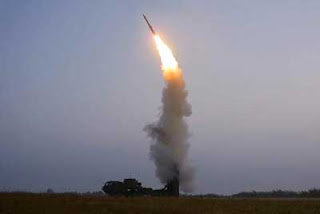 Pyongyang, October 1 (KCNA) -- The Academy of Defence Science of the DPRK test-fired an anti-aircraft missile newly developed by it on September 30, to confirm the practicality of operation of the launcher, radar and all-purpose battle command vehicle as well as the comprehensive combat performance of the missile.

Pak Jong Chon, member of the Presidium of the Political Bureau and secretary of the Central Committee of the Workers' Party of Korea, watched the test-launch with leading officials in the sector of national defence scientific research.

The Academy of Defence Science said that the overall test is of very practical significance in studying and developing various prospective anti-aircraft missile systems, noting that the remarkable combat performance of the new-type anti-aircraft missile that has brought about a substantial increase in the rapid responsiveness and guidance accuracy of missile control system as well as the distance of downing air targets with the introduction of new key technologies like a twin-rudder control technology and double-impulse flight engine has been verified. -0-