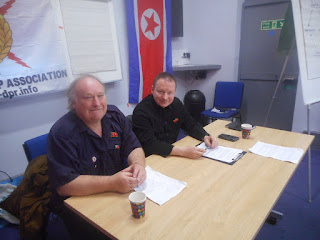 Some people even travelled a hundred miles from Hereford to be at the meeting.

Dr Dermot Hudson, Chairman of KFA UK and Official Delegate of KFA for the UK opened the meeting . He said that it was the first ever meeting of the KFA UK West of England branch . KFA UK is committed  to holding meetings in all parts of the country, not just in London . In the past we have had meetings in Liverpool , Manchester , Stoke On Trent , Derby and Glasgow .

Dr Hudson said KFA was founded to defend People’s Korea with no ifs and buts . He said before KFA was founded in November 2000 , there were virtually no pro-DPRK websites and the CIA and south Korean regime spread misinformation about the DPRK ‘ . Dr Hudson said the media in Western countries have a huge amount of power and can elect governments . People’s Korea is subjected to a campaign of vilification and demonization. 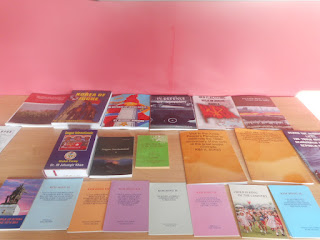 Dr Hudson explained how he had visited the DPRK 18 times since 1992  the last time being in 2019 . He related how by visiting the DPRK he saw very clearly that media propaganda against the DPRK is untrue . He said that there is no one starving in the DPRK and no one begging . On one visit to the DPRK on returning to London , Dr Hudson recalled how he saw homeless people at Charing Cross and was even approached by a prostitute in his local area when he went out to buy fish and chips but the DPRK does not have prositution as it was abolished in 1946 .

Dr Hudson said it is not true that Pyongyang is’ a city of the elite ‘ . In fact it has many industrial enterprises and many workers live in the city . Income differentials are low.

Questions were put to Dr Hudson such as the role of young people in the DPRK and how they choose jobs , also the use of energy in the DPRK .

Alan Bolon head of KFA UK West of England  spoke about
‘The value of the Juche Philosophy in social life’ .  He gave an outline of what Juche means in terms of social life  and said ‘ people in DPRK are aware of their historical mission to their country and play a decisive role in creating a man - centred outlook,  to their life collectively and individually. They fill vital needs by being creatively active in social and economic country life. Popular masses are united by all individual needs and aspirations play a decisive role in their social life, realizing values of the  Juche Philosophy every day.

Juche Philosophy, a philosophy that puts man in the centre of attention and its timeless values shaping their destiny and guides them on the road to achieve happiness and national prosperity for the  DPRK

A question was raised about the relationship of Juche to Marxism-Leninism .

A general discussion was held . There was positive feedback for KFA UK for establishing ‘People’s Korea Today ‘.

Literature including the works of President KIM IL SUNG , Chairman KIM JONG IL and Marshal KIM JONG UN as well as the publications of KFA UK and Dr Dermot Hudson was displayed.

A video should be available later.