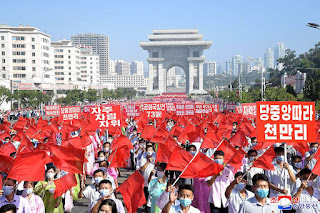 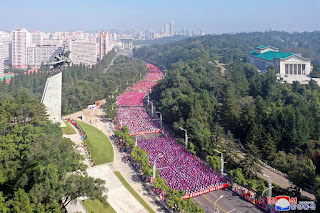 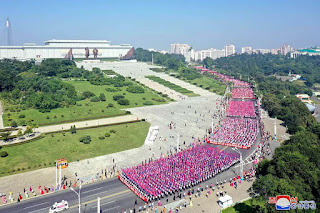 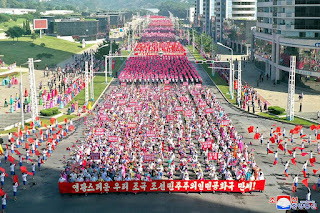 Pyongyang, September 10 (KCNA) -- There was a mass demonstration of working people, youth and students in the capital city on Thursday in celebration of the 73rd founding anniversary of the DPRK.

The area around the Arch of Triumph, the starting place of the demonstration, was crowded with lots of people who turned out to grandly celebrate the significant holiday.

Prior to the mass demonstration, Ri Myong Chol, secretary of the Pyongyang City Committee of the Workers' Party of Korea, made a remark.

He said that on the occasion of the 73rd founding anniversary of the DPRK, our glorious country, the mass demonstration procession will march toward Kim Il Sung Square shining with the history of victory and glory of our state, while displaying the proud feature of the working people who are dynamically advancing along the socialist road of Juche only.

The mass demonstration will display before the whole world the indomitable spirit of our people who are struggling with redoubled efforts toward a powerful, prosperous and highly civilized socialist country while demonstrating the might of the harmonious whole and single-minded unity, the greatest strength of the DPRK, he said. He called upon all to valiantly march with the revolutionary will to bring earlier the prospering future of the DPRK, rallied close around the respected Comrade Kim Jong Un in one mind.

At 10:00 the mass demonstration began, led by the ranks of people holding the flags of the Republic as the solemn playing of "Ode to General Kim Jong Un" resounded forth the plaza of the Arch of Triumph.

The participants marched full of force, raising thunderous cheers in deep reverence for Kim Jong Un who is creating the new great history for materializing the ideal and goal of building the most powerful country in the world with his transparent faith in independence and ardent patriotism.

The ranks of officials of ministries and national institutions, working class, agricultural workers and intellectuals and other ranks passed streets waving the flags of the Republic, red flags and bouquets.

The dynamic feature of the ranks of the youth and students and the ranks of children's union marching past holding slogan boards bearing phrases reading "Revolutionary Spirit of Paektu" and "Paektusan Spirit" showcased well the bright prospect of our country.

The demonstrators were encouraged by lots of citizens along the routes they passed.

Citizens enthusiastically cheered the participants, waving flags of the Republic, bouquets and hands from their apartment windows.

The demonstration reached its height as its participants entered Kim Il Sung Square.

The citizens warmly applauded the demonstration ranks as they advanced holding placards.

Enthusiastic cheers of the participants in the mass demonstration and the citizens resounded far and wide in the clear and blue sky in September. -0-