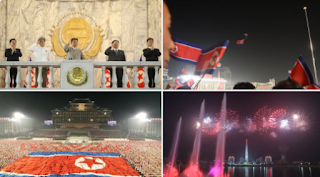 The Association For the Study of Songun Politics UK (ASSPUK) , the British Group for the Study of the Juche Idea, the UK Korean Friendship Association (UK KFA )  ,and the British Solidarity Committee for Peace and Reunification in Korea (BSCPRKP )together issued a statement hailing the 73rd anniversary celebrations of the foundation of the  Democratic People's Republic of Korea ;

Recently the Democratic People's Republic of Korea celebrated its 73rd anniversary , the centrepiece of the celebrations was a grand parade of parade of paramilitary and public security forces  of the DPRK as well as well as  a mass demonstration of working people, youth and students in Pyongyang , both of which  .were held on the 9th of September , DPRK foundation day . The parade of the paramilitary and public security forces was held in the presence of respected Marshal KIM JONG UN .

The parade was  truly magnificent   and absolutely spectacular . Only People's Korea could stage such wonderful events .

There were so many different new innovations in the parade such as parachutists  landing in KIM IL SUNG square , the singing of the national anthem lead by a popular leading singer in the reviewing stand and other firsts such as miitary dogs in the parade and also fire engines . 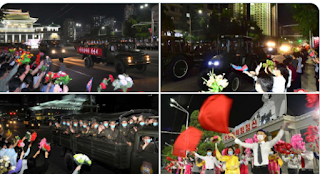 People's Korea held this grand celebrations at a time when some countries are in meltdown and chaos due to Covid 19 . People's Korea guided by the great Juche idea and led by respected Marshal KIM JONG UN  was able to stage such grand scale public events that would be impossible in other countries . Other countries are facing austerity , poverty, price rises , unemployment and shortages but People's Korea stands out as a beacon of hope .

Some liars and slanderers claim that People's Korea is a 'poor country ' and that 'there is no electricity in north Korea ' but the scenes from the parade proved these assertions were myths. The parade of the paramilitary forces and public security forces plus the the demonstration of working people , youth and students demonstrated the pure single hearted unity of the people of the DPRK .

Moreover the DPRK 73rd anniversary celebrations fully demonstrate the durablity and invinciblity of the superior Juche-based socialism of the DPRK .