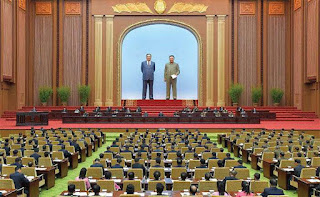 Pyongyang, September 29 (KCNA) -- The first-day sitting of the 5th Session of the 14th Supreme People's Assembly (SPA) of the Democratic People's Republic of Korea (DPRK) took place at the Mansudae Assembly Hall on Sep. 28.

The session was convened at a time when all the people across the country are making a dynamic general advance for the overall prosperity of our own-style socialism in the revolutionary fighting spirit of self-reliance, true to the great action programme indicated at the 8th Congress of the Workers' Party of Korea (WPK).

Present there were the deputies to the SPA.

Choe Ryong Hae, chairman of the SPA Standing Committee, made an opening address.

The session decided on its agenda items:

First, on adopting the DPRK's law on development of city and county

Second, on adopting the DPRK's law on provision of education of young people

Third, on amending and supplementing the DPRK's law on the plan of national economy

Fourth, on the performance of execution, inspection and supervision over the DPRK's law on recycling

The first-day sitting discussed the draft laws to be newly enacted, amended and supplied and the performance of the execution, inspection and supervision over the law on recycling.

Deputy Ko Kil Son, secretary general of the Standing Committee of the SPA, made a report on the first, second and third agenda items.

The reporter said that the drafts of the DPRK laws on the development of city and county and on the provision of education of young people and the draft amendment and supplement of the DPRK law on the plan of national economy were to be discussed and adopted to thoroughly apply the WPK's line on strengthening city and county and its idea of prioritizing youth and to realize the state unified guidance and planned control of the economic work by the state.

He referred to the immortal exploits performed by President Kim Il Sung, Chairman Kim Jong Il and the respected Comrade Kim Jong Un in boosting and developing cities and counties, settling the matter of young people and building a powerful self-supporting economy with their outstanding idea and energetic guidance, and stressed the importance and significance of the laws to be newly enacted, modified and supplemented.

He gave an explanation of chapters specific to the draft laws and draft amendment and supplement of the laws which would contribute to turning all cities and counties into strategic strongholds of a civilized, prosperous and powerful socialist country and areas with their specific characteristics, successfully preparing young people to be dependable successors to the revolutionary cause of Juche with the nationwide social support, and bolstering the independent, planned and popular nature of the national economy.

He stressed that the session would legally fix key issues arising in the independent and multi-sided development of cities and counties, the education of youth and the planned management of the national economy as required by the reality, thereby providing another legal guarantee for making a victorious advance in socialist construction.

The SPA Standing Committee proposed the drafts of the DPRK laws on the city and county development and on the provision of education of young people and the draft amendment and supplement of the DPRK law on the plan of the national economy for the discussion at the SPA session according to Article 95 of the Socialist Constitution.

The first-day sitting heard speeches following discussion of the referred draft laws and draft amendment and supplement at study and consultative meeting, and decided to adopt them as laws of the SPA.

The fourth agenda item was discussed.

The report and speeches generally analyzed and reviewed successes, experience, mistakes and lessons drawn in all fields of the national economy after the adoption of the DPRK law on recycling at the 3rd session of the 14th SPA.

The reporter and speakers said that the struggle for building a powerful socialist country urgently calls on all the fields and units to adopt recycling as the major motive force of the economic development together with the home production of raw and other materials and equipment.

They set forth innovative and practical ways for carrying out the state recycling goal.

The speakers evinced their will to maintain stricter system and order in recycling to meet the needs of new stage of development of our revolution and the changed environment so as to strengthen the legal guarantee for ensuring the sustained development of the economy and preserve the natural resources and ecological environment of the country.

The first-day sitting adopted with unanimous approval the decision of the DPRK SPA "On thoroughly carrying out the DPRK law on recycling".

The deputies to the SPA began study and discussion of the draft law on the city and county development, draft law on the provision of education of young people and draft amendment and supplement of the law on the national economy plan. -0